Individual investors have become neutral to one of the most extreme degrees in the past 15 years.

That’s usually a good sign in a bull market, especially longer-term. It’s also been a good sign that there are more bears than bulls, leading to consistent gains in the longer-term.

Good on you, small-caps

Heading into Thursday, small-cap stocks raced ahead of large-cap stocks over the past week. The Russell 2000 led the Dow Industrials by more than 5%, one of the largest-ever bouts of outperformance. It was a decent sign for stocks going forward, especially the Dow.

A bad couple of days in major Dow indexes could trigger a Dow Theory sell signal. 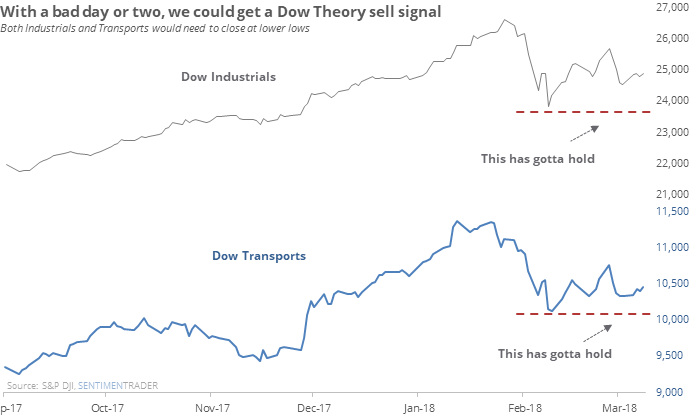 Others led to a poor reward relative to risk for the Dow and most other stock indexes. There weren’t many places to hide, though defensive sectors and commodities did the “least worst”.

Yesterday was now the 5th straight day SPY lost more than 0.75% in shares outstanding, tied for 3rd-longest in its history.

The post titled Neutral Investors, With Soaring Small-Caps And Dow Theory Warning was originally published as on SentimenTrader.com on 2018-03-09.