An unprecedented number of Nasdaq stocks have been cut in half

Valuations are at historical highs, companies are raising billions based on fairy dust, and the Fed is signaling a tightening cycle. All of these are scaring investors that we're on the cusp of a repeat of 1999-2000.

There are certainly some valid comparisons to that period. And there are some compelling counter-arguments as well. Whatever the fundamental and macro considerations, there is no doubt that investors have been selling first and trying to figure out the rest later.

Since the speculative mania in January/February 2021, many of the riskiest stocks have tumbled. It just so happens many of those stocks trade on the Nasdaq exchange.

After Wednesday's post-FOMC selloff, more than 38% of stocks trading on the Nasdaq are now down 50% from their 52-week highs. Only 13% of days since 1999 have seen more stocks cut in half.

At no other point since at least 1999 have so many stocks been cut in half while the Nasdaq Composite index was so close to its peak. When at least 35% of stocks are down by half, the Composite has been down by an average of 47% (!) from its 3-year high.

Bulls will suggest that most of the damage has been done, and the indexes should be able to soar from here. Bears will say this is just like the internet bubble, and the index is about to "catch down" to the average stock.

To get a sense of who may most likely be correct, we took a look at similar behavior over the past 23 years.

Dean noted that a new signal from a voting member in the composite thrust model registered an alert on Tuesday. 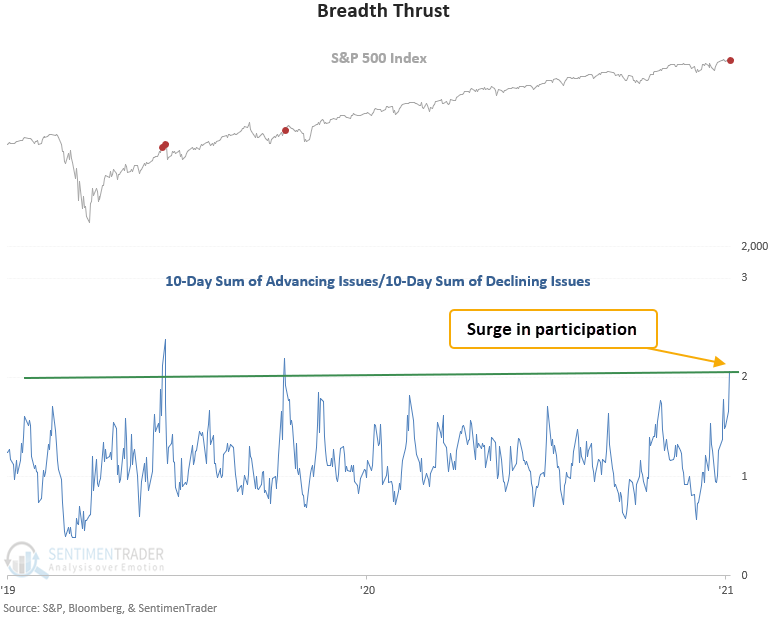 This signal has triggered 56 other times over the past 90 years. After the others, future returns, win rates, and risk/reward profiles were solid across all time frames. Since 1942, the win rate in the 12-month time frame has been excellent, with 44 out of 48 winners.

The post titled Nasdaq stocks have never acted like this was originally published as on SentimenTrader.com on 2022-01-07.