Mutual fund managers continue to hold a near-record low level of cash relative to other assets. A surge in short-term interest rates has not tempted them to hold more of a cash cushion. They are now holding 2.5% less cash than they “should” be, which has led to high long-term risk.

Sudden volatility across asset classes triggered a huge one-day drop in risk appetite among investors. That was large enough to move it into extreme territory. 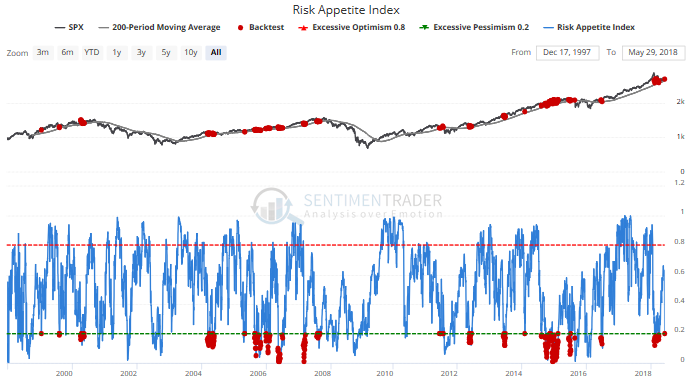 Big drops, and to this kind of extreme, have led to good medium-term returns in stocks.

A day after the small-cap Russell 2000 index surged more than 1% to a new high, it pulled back but not enough to erase yesterday’s gains.

The post titled Mutual Fund Cash Sinks Along With Risk Appetite was originally published as on SentimenTrader.com on 2018-06-01.