A market crash will usually prompt folks to pare back their leverage. Based on figures from March, the virus sparked just that behavior, as investors' debt borrowed against stock holdings plunged 10%.

That's one of the largest one-month declines in margin debt in history, especially over the past 60 years when the data became less volatile.

Since margin debt peaked in 2018, it has declined by more than 25%. It looks like a big decline on a chart but is only a little more than half of the decline seen during the last two protracted bear markets. Even so, a drop of 25% from a peak is historically deep. 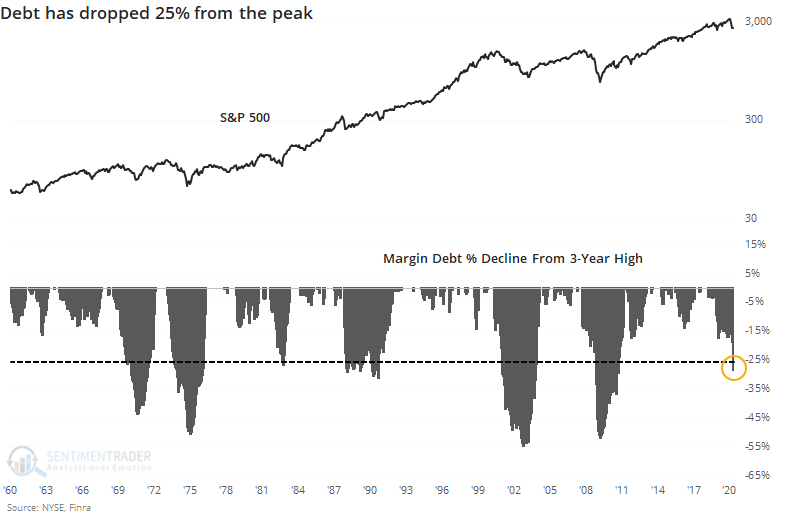 This has had a mixed record of being enough of a drop in leverage. The worst of the declines stopped when debt contracted by 40% - 50%, with some of the lesser market drops leading to a smaller drop in leverage.

The data is less reliable the further back we go, so it makes sense to place a heavier weight on more recent signals. And in that case, returns over the next 2-3 months weren't great, especially over the next 2-3 months. The drop in 1982 was about the worst of it, so forward returns were excellent. Other than that, recent decades showed either a loss or small gain.

Margin debt is one of those indicators that both bulls and bears like to use when it supports their argument. The fact is that it's an inconsistent data set that mostly just tracks the market itself.

The post titled Market crash causes investors' leverage to plunge was originally published as on SentimenTrader.com on 2020-04-29.