Investors have moved into “safe” low-volatility stocks at the expense of “risky” high-beta ones. The ratio between the two just hit a two-year high, which has preceded some trouble for stocks over the shorter-term. 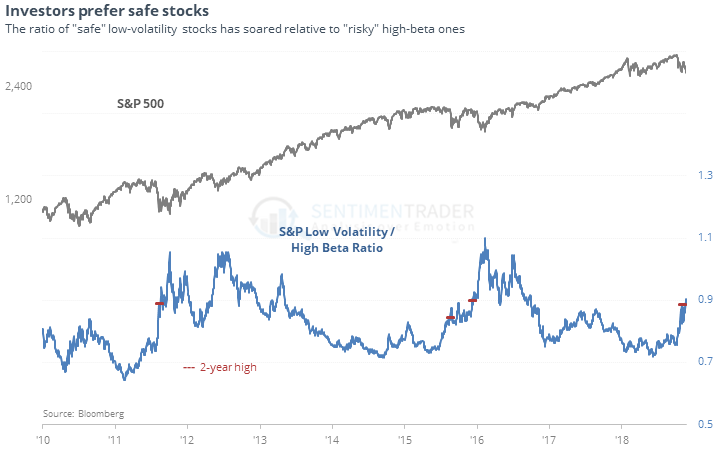 Over the longer-term, which is where this should be most effective, its record was mixed. The S&P did show relatively poor returns, but there were some large gains too. Perhaps most importantly, the risk/reward was skewed heavily to the downside.

If we assume the worst case, that Friday’s move into a correction for the S&P 500 morphs into a peak of economic activity and a recession, then most of the damage could already have been done.

It takes the NBER about six months to announce it, by which time the S&P has lost a further 5% on average. But its returns over the next few months were much less severe than most investors would expect. From the date the S&P fell into one of these worst-case corrections until three months later, it showed a gain only once. But its average return was only -2.8%.

The stock of art dealer Sotheby’s (BID) has dropped by more than a third from its peak in June. This is often taken as a warning sign for the broader market. We looked at this in the November 11, 2015 report, where declines of 33% in BID correctly preceded 3 major declines in stocks, and had 2 false signals.

The latest Commiments of Traders report was released, covering positions through Tuesday