Looking to financials as a leader as volatility ebbs

Financials are not leaders

One of the many concerns being bandied about now is the continued relative underperformance of financials. Analysts keep looking for this group to lead, or at least show some signs of relative strength versus the broader market, and they keep disappointing.

It raises a good question - at other recent and important low points, did financials turn up relative to the market before stocks bottomed? We'll look at the most recent inflection points, as well as the more important lows since 1928 to see if there's a pattern.

For those who prefer to read the conclusion first, the answer was "no."

During the depths of the panic in October and November 2008, it's no surprise to see that financials were leading the market lower. That was still the case into the early spring of 2009 as stocks formed a v-shaped bottom and financials were hitting new relative lows that entire time. 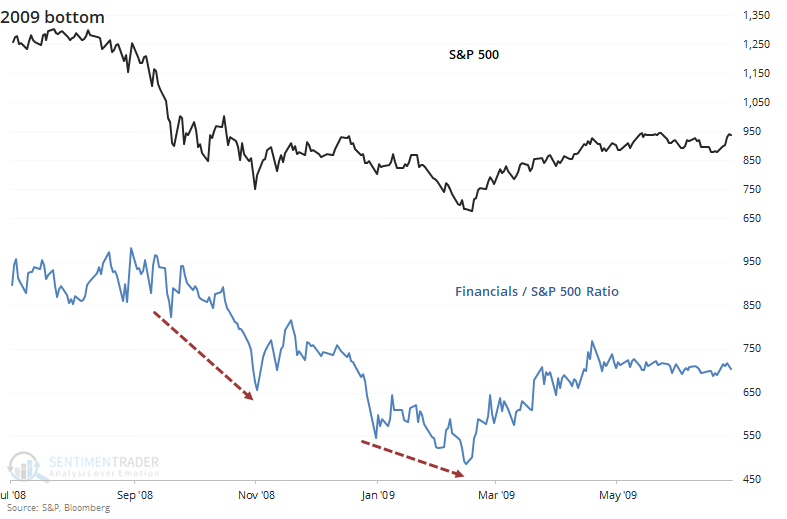 A survey of other major bottoms since 1928 shows a similar pattern.

The VIX "fear gauge" has fallen 9 out of the past 13 days, while still being relatively elevated. When this happened in the past, the S&P's short term returns were mixed, but mostly positive over the next 6-12 months. Since the VIX itself rarely stays elevated for too long, it typically fell over the next 2+ months.

The post titled Looking to financials as a leader as volatility ebbs was originally published as on SentimenTrader.com on 2020-04-07.