One of the most popular knocks about the rally over the past couple of weeks is that it's "Just another bear market rally." There was an avalanche of notes about how the biggest rallies occur in bear markets. That's a given because volatility is higher during downtrends.

But this has been the most impressive recovery in history, even after Tuesday's intraday reversal. Classic technicians will be all over the idea that stocks suffered an intraday reversal at the "classic" 38.2% Fibonacci resistance level.

While it's common knowledge that stocks enjoyed multiple large rallies during prior bear markets, at no point during the rallies in the 1930s or 2008 did stocks manage to claw back as much of the losses as quickly as they've done this time.

The S&P 500 bottomed 11 days ago. In that short span, it's retraced nearly 37% of its decline. Looking at all historical instances of the S&P clawing back more than 30% of its decline after 11 days, not a single one was was "just a bear market rally."

Media headlines continue to shower readers with more bad news while governments around the world aim for multiple rounds of stimulus to save their economies. One of the latest pieces of bad news relates to dividends.

Bloomberg demonstrates that the number of media stories with "dividend suspension" has soared. The previous high was in late-February 2009, just 2 weeks before stocks bottomed and began a decade long bull market. 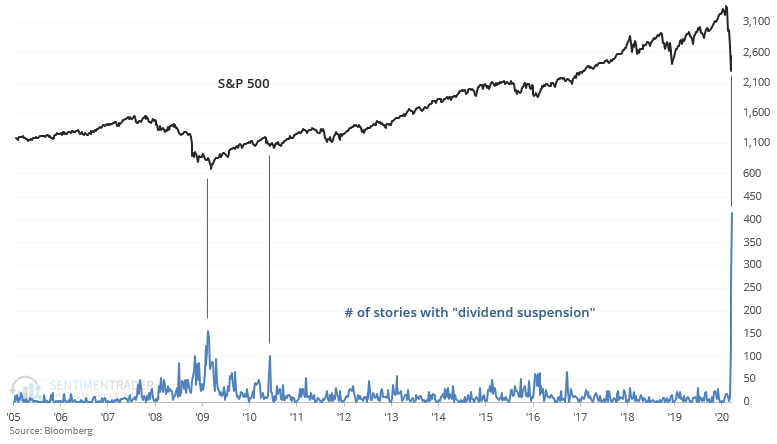 The post titled "Just a bear market rally" was originally published as on SentimenTrader.com on 2020-04-08.