A bottom in jobless claims

After hitting a multi-year low, jobless claims have hit a 6-month high and are above a 52-week average.

That tends to lead to a rise in the unemployment rate, an input to many recession models. But a nascent uptrend in jobless claims has not consistently led to weakness in stocks for at least the next year. Over the next 6-12 months, there was precious little evidence that rising claims exerted a negative influence on stocks.

Margin debt plunged in October and is now down year-over-year. After a prolonged rise, the first y/y decline has had a modest record at preceding future weakness in stocks. 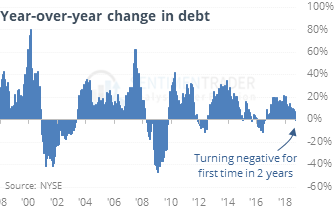 Investors’ net worth is also reversing after hitting a record low, but that, too, has a mixed record for stocks. The S&P was weak more than half the time over the next three months, but reward was still higher than risk. It marked the peak of several bull markets but most often, gave false warnings.

Kind of a thrust

Stocks haven’t quite seen a breadth thrust off the low but it got close. After hitting a 6-month low on Friday, Up Volume was more than 70% on Monday and just under 90% on Wednesday. Since 1950, there have been 26 similar signals, leading to modestly positive returns.