Overseas out, bonds in

Near the end of April, investors fled non-U.S. equity funds, with the 2nd-largest outflow in five years. That has been a good contrary indicator in the past.

At the same time, they moved more into bonds, with other measures confirming the increasingly consensus sentiment that yields should keep declining.

It was barely three years ago that the IPO market was moribund. It’s returning in an increasingly hyped-up way, and on Thursday a billion-dollar (valued) new issued saw its stock more than double from its offer price intraday.

We've seen in reports from years past that this has been a long-term troubling signal for stocks. This year is on track to break records for various measures of IPO issuance and returns, and none of those have been good signs.

In addition to the bond sentiment noted above, the TLT fund has taken in an average of more than $100 million per day during the past month. The Backtest Engine shows that TLT was higher a month later only 13% of the time, averaging -1.5%, after other days with such heavy inflow. When TLT averaged an outflow of more than $50 million per day, then it rallied 64% of the time, averaging 0.5%.

Tweeps are bullish on the Dow

Social Sentiment for the Dow Industrials fund, DIA, has averaged less than 1.0 for the past 20 days, meaning there are fewer pessimistic tweets about the fund than optimistic ones (like a put/call ratio, the higher the number, the more pessimism there is). According to the Backtest Engine, over the past 5 years DIA has been positive a month later 43% of the time. That compares to 78% of the time when the 20-day average is above 1.25. 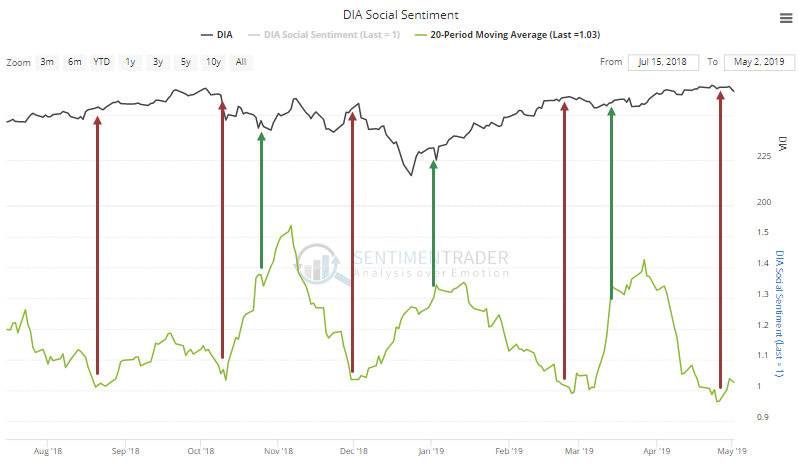 The post titled IPO Fervor Returns was originally published as on SentimenTrader.com on 2019-05-03.