Investor And Advisor Optimism Is The Highest In Years

Investor and advisor optimism has spiked, as the yield curve goes from inversion to the steepest in a year.

With the U.S. stock market trending higher into year-end, more and more market investors are turning optimistic towards U.S. equities. This stands in stark contrast with the end of 2018, when the common question wasn't if a recession was about to start, but when it will start.

Our Advisor and Investor Model, which looks at sentiment readings from advisor and investor surveys, has risen to the highest level in almost 3 years: 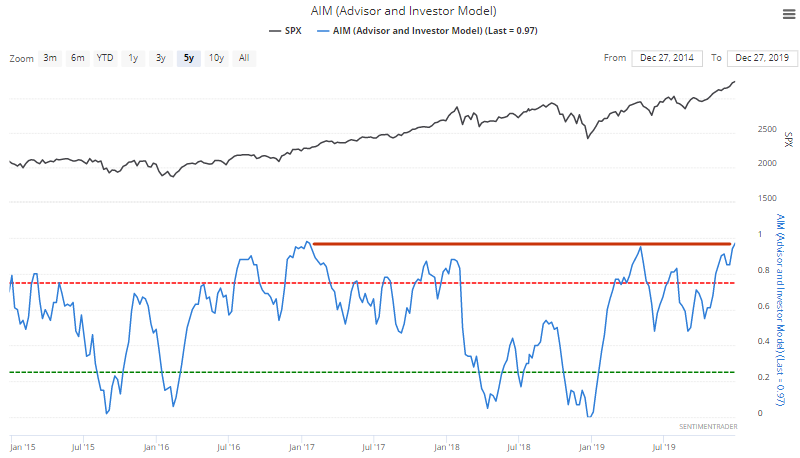 While extremely high sentiment readings are often short term bearish for stocks, they aren't usually bearish on a 6-12 month basis. A resurgence in excessive optimism tends to happen 1-2 years after a major period of market turmoil. It usually takes some time for investors and traders to mentally shake off the ghosts of the past.

AIM rising to an almost 3 year high occurred in:

Investors were freaking out over the yield curve inversion this year due to the signal's historical ability to predict recessions and bear markets. With long term yields no longer falling, the 10 year - 2 year Treasury yield curve has steepened to the highest level since 2018:

We can narrow down this list of dates to cases which saw an inverted yield curve sometime over the past year: 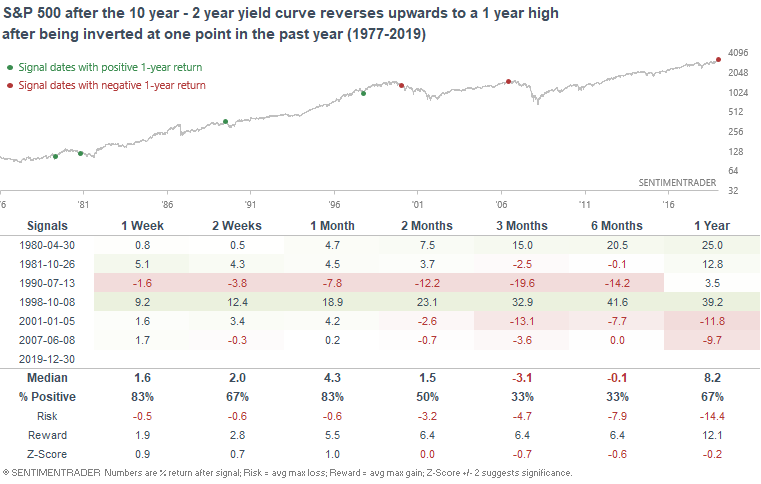 Overall, the yield curve is sending a long term bearish signal for stock market bulls. It will weigh on our Macro Index for January 2020, but will not be enough to flip it from bullish to bearish. It's important to remember that the yield curve is merely one of many fundamental indicators to watch, and is not the Holy Grail of timing bear markets or recessions.

The post titled Investor And Advisor Optimism Is The Highest In Years was originally published as on SentimenTrader.com on 2019-12-31.