Consumer Staples stocks have been on a roll. In December, we saw that those stocks were seeing an impressive thrust and longer-term recovery, which has tended to see further gains in the months ahead.

So far, that's been the case. The McClellan Summation Index for Staples is now well above +1000, one of its highest readings in a decade. It's not just Staples. Another core defensive sector, Utilities, is also seeing impressive internal momentum. And so is the other one, Health Care. 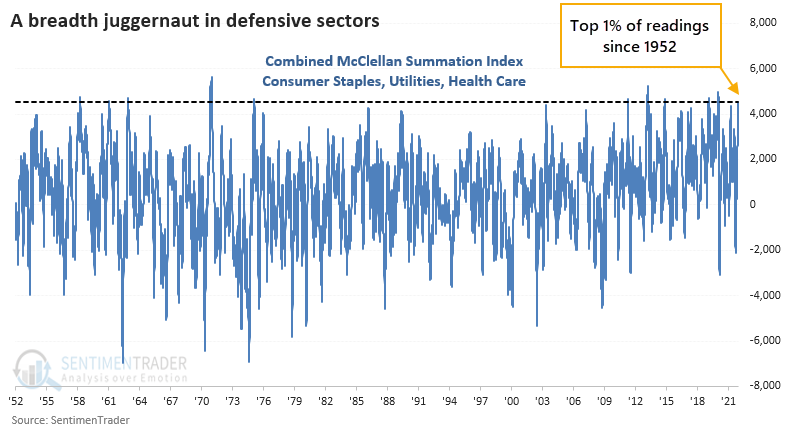 It's assumed that if investors are so hyper-focused on defensive stocks, it's a bad omen for the broader market. Not to be. While the S&P 500 didn't exactly go gangbusters after these signs of long-term internal momentum in the defensive sectors, it still showed above-average returns.

Dean noted that a trading model that uses the Optix Index to identify when sentiment reverses from a period of pessimism issued a buy signal for the energy sector on 1/7/22.

The model applies an 84-day range rank to the 10-day moving average of the Optimism Index for the XLE ETF. As a reminder, the range rank indicator measures the current value relative to all other values over a lookback period. A new buy signal occurs when the range rank crosses back above the 78th percentile. At the same time, the 5-day rate of change for the ETF must be positive. 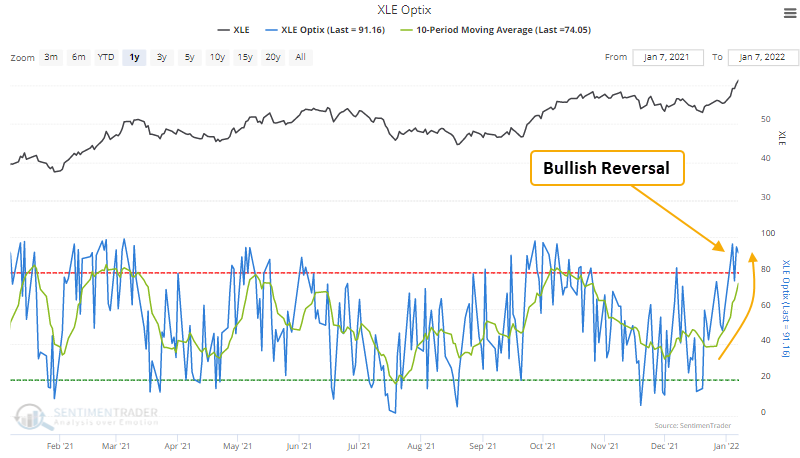 This signal has triggered 32 other times over the past 22 years. After the others, energy sector future returns, win rates, and risk/reward profiles were solid across all time frames, especially the 2-month window. The trading model performed well during the most recent energy bear market period between 2014-2020, with positive returns at some point up to 2 months later in 6 out of 7 instances.

The post titled Internal momentum has surged in defensive sectors was originally published as on SentimenTrader.com on 2022-01-11.