Institutions are coming back from the "sidelines"

One of the standout pieces of data during the pandemic was the exponential rise in money market assets, including those catering to retail investors and institutions.

This always brings up the bulls' argument that there is a lot of "cash on the sidelines" to drive stocks higher, as the WSJ noted in late 2019. Clearly, it's not always a good argument.

"Every time someone says, “There is a lot of cash on the sidelines,” a tiny part of my soul dies. There are no sidelines. Those saying this seem to envision a seller of stocks moving her money to cash and awaiting a chance to return. But they always ignore that this seller sold to somebody, who presumably moved a precisely equal amount of cash off the sidelines.

If you want to save those who say this, I can think of two ways. First, they really just mean that sentiment is negative but people are waiting to buy. If sentiment turns, it won’t move any cash off the sidelines because, again, that just can’t happen, but it can mean prices will rise because more people will be trying to get off the nonexistent sidelines than on. Second, over the long term, there really are sidelines in the sense that new shares can be created or destroyed (net issuance), and that may well be a function of investor sentiment. But even though I’ve thrown people who use this phrase a lifeline, I believe that they really do think there are sidelines. There aren’t. Like any equilibrium concept (a powerful way of thinking that is amazingly underused), there can be a sideline for any subset of investors, but someone else has to be doing the opposite. Add us all up and there are no sidelines."

When we start to see the meteoric rise in money market assets stop and reverse, surely the "cash on the sidelines" argument will be used. And we're starting to see that right now among institutions. 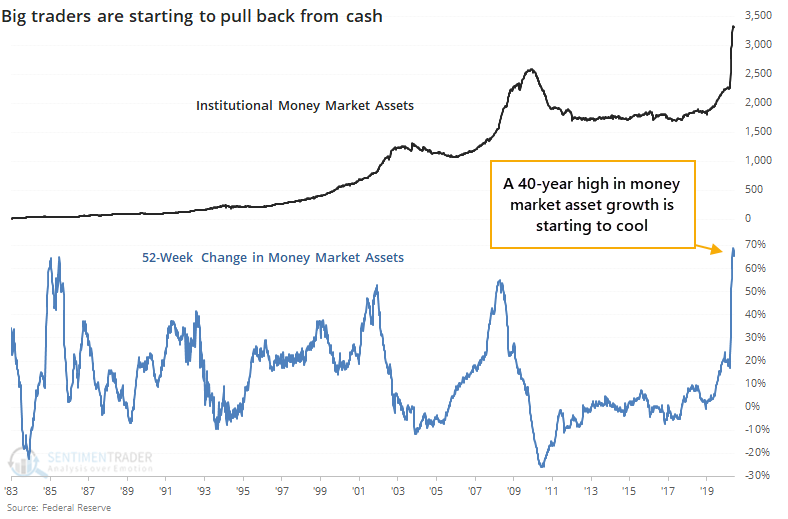 It seems like this should be a good thing. If institutions are pulling funds from cash, then it has to go somewhere. Bulls like to assume that the most logical place is in stocks. When the yearly growth in institutional money market assets reached at least 40% then pulled back by at least 3%, it did consistently signal that they would keep pulling money out of those liquid accounts. But it did not consistently signal that the money was going into stocks, or at least that it made a difference.

The post titled Institutions are coming back from the "sidelines" was originally published as on SentimenTrader.com on 2020-06-18.