Corporate insider sentiment has diverged from investors' as the AAII survey shows a jump in optimism.

The ISM survey of purchasing managers continues to hover near its lowest level in years, even while the gain in stocks over the past 12 months is among its best in years. That is an unusual disconnect, with bulls and bears arguing about what it means.

Looking at similar disconnects since 1948, bulls might have an upper hand in the argument, though it was not a strong edge – the S&P’s forward returns were below random across almost every time frame, though it did rise most of the time. Mostly, it was a worry over the next 6 months and not much more than that.

There has been talk in the media about blow-off tops recently. This may not be the case, at least according to the trend in investor attitudes as polled by the American Association of Individual Investors. After peaking last October, the percentage of investors considering themselves bullish on stocks has not spent a single week above 45% despite this year's big rally.

So when sentiment according to AAII does finally jump, it's typically not the final blow-off top to a bull market. The following table demonstrates what the S&P did next after AAII Bullish % jumped above 45% for the first time in more than 30 weeks. 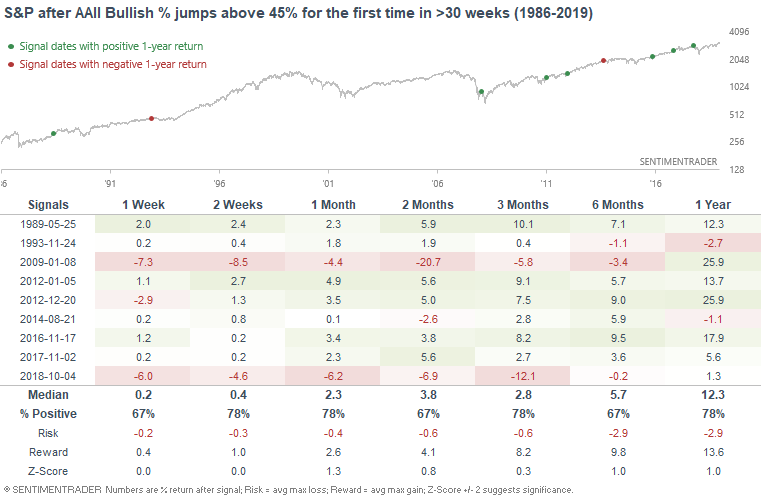 While forward returns weren't perfect, the S&P's performance over the next year was still more bullish than random. It doesn't appear that a return to optimism from this group, after such a long time being crabby, is necessarily a bad sign.

The post titled Insiders' Sentiment Is Less Rosy Than Investors' was originally published as on SentimenTrader.com on 2019-12-06.