Hedgers Are Hedging As Transports Lag Amid Momentum Ebb

Hedgers in the major index futures pared their positions by more than $10 billion at the end of February. That’s one of their larger one-week increases in hedging activity. 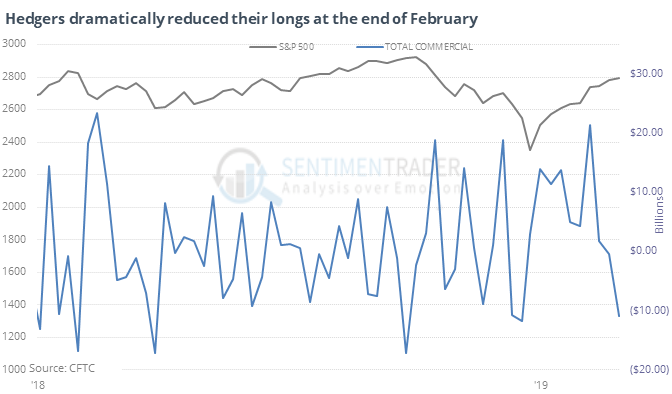 When they’ve made such big changes in the past, it has been a bit of a negative for stocks.

The Dow Transports have lagged the Dow Industrials during this rally. While the Industrials got to within 3% of their 52-week high, Transports never got closer than 8% to their own high.

The S&P 500 closed below its 10-day average for the first time in 40 sessions, ending one of its longest-ever streaks above average. Other times it lasted this long, buyers stepped in short-term but it tended to not last. This was also the first time in two months that NYSE Up Volume dropped below 15% after seeing a breadth thrust in January.

Over the past month, the SPY Liqudity Premium dropped to -35%, suggesting investors are no longer valuing the liquidity of ETFs versus individual stocks. Per the Backtest Engine, when the 20-day average dropped to this low of a level, the S&P 500 rallied during the next month only 38% of the time.

The post titled Hedgers Are Hedging As Transports Lag Amid Momentum Ebb was originally published as on SentimenTrader.com on 2019-03-07.