Gold miners have a lot to prove

Gold miner surges have been hard to sustain

The go-to index for gold miner investors is the NYSE Arca Gold Bugs Index. BUGS stands for Basket of Unhedged Gold Stocks. The index contains companies that do not hedge their gold production beyond 1.5 years to better correlate to gold prices.

Over the past week, Dean notes that the index has jumped more than 10%, within a couple of months of languishing at a 1-year low.

A similar reversal signal has triggered 15 other times over the past 52 years. After the others, future returns and win rates were weak across short and medium-term time frames. They were especially bad during the past 30 years.

When the NYSE Gold BUGS index surges from a 1-year low, history suggests the momentum is a bounce in a downtrend, especially when the dollar index is in an uptrend.

The chart below displays the annual seasonal trend for TLT (iShares 20+ Year Treasury Bond ETF ). Jay pointed out how we are about to enter a period of short-term seasonal strength.

Since its inception, this period has seen TLT rise 84% of the time with a very favorable risk to reward ratio during these windows.

There are many possible ways to play a short-term bullish setup using options on ticker TLT. One strategy is a bull call spread that involves buying a call option at one strike price and selling another call option of the same expiration cycle at a higher strike price.

Entering trades based solely on seasonality should always be considered speculation and not investment. It is typically wise to bet relatively small amounts of capital on speculative bets.

Turning the tide. A 50-day average of the McClellan Summation Index for stocks trading on Brazil's Ibovespa exchange is starting to curl higher from one of the most oversold readings in 20 years. 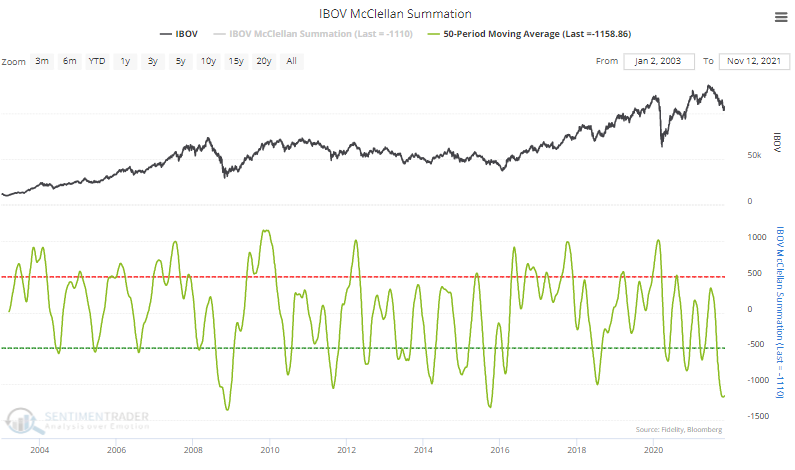 The post titled Gold miners have a lot to prove was originally published as on SentimenTrader.com on 2021-11-15.