Gold has had a very good year, and it's only half over

Tech isn't the only asset having a good half-year - gold is, too.

Through about the half-way point of 2020, gold has returned more than 16% and is at its highs for the year. Meanwhile, it suffered only a small drawdown from where it closed 2019.  Momentum is a powerful thing, and when gold had good years, it tended to keep going. Over the next few months, gold tended to keep rallying, with only 4 out of 18 years showing a substantial decline in the months ahead.

One concern is that "smart money" hedgers are betting against the metal, holding more than 50% of open interest net short, which means that speculators are heavily long. This has been an issue in recent years, but not so much historically. 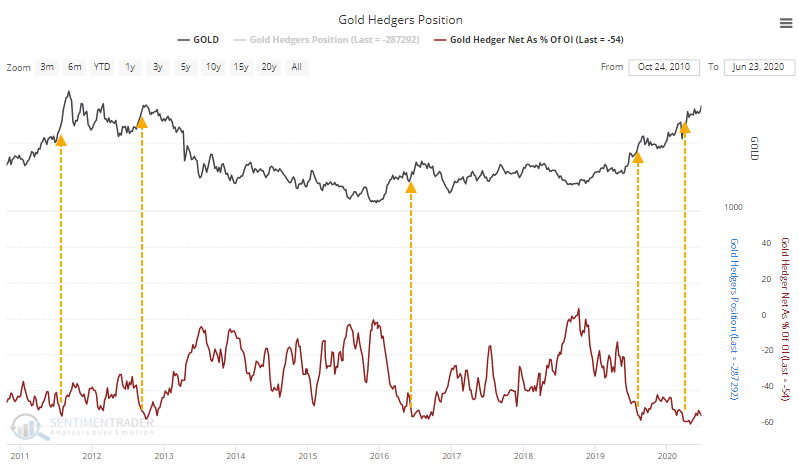 The fact that gold is still hitting new highs despite signs of high optimism earlier this year is a good sign. If gold can continue to hold ground despite high optimism, then it suggests a long-term positive market environment much like the mid-2000s. There are some minor shorter-term negatives; if those can calm down in the weeks ahead, then it should present a better risk/reward for the metal heading into the late summer.

The post titled Gold has had a very good year, and it's only half over was originally published as on SentimenTrader.com on 2020-06-30.