Rising and falling together

The major sectors within the S&P 500 have mostly been moving in concert, so correlations have risen quickly over the past month. Correlations are also rising among safe-haven assets.

When both sets of correlations have been this high in the past, it has generally coincided with times of high anxiety in markets, preceding gains in the S&P 500 every time but once over the next 6-12 months, with the exception being a signal right before the worst of the financial crisis. For the other assets, it was less of a signal.

While that could be considered a sign of risk-aversion among investors, and it may be, it wasn’t necessarily a negative signal. Stocks (and gold) mostly rose after similar behavior. Same goes for when gold's rolling 1-year return beat the S&P's double-digit gain.

The momentum of rising and falling securities on the NYSE has turned positive after weeks in negative territory, and longer-term momentum remains solidly positive. That combination has led to good long-term returns, with only a couple of modest losses over the medium- to long-term.

The ratio of the S&P 500 to Russell 2000 has been in an uptrend for nearly a year, meaning that small-caps have consistently lagged. While that's usually taken as a troubling sign, historically it hasn't proven out that way. 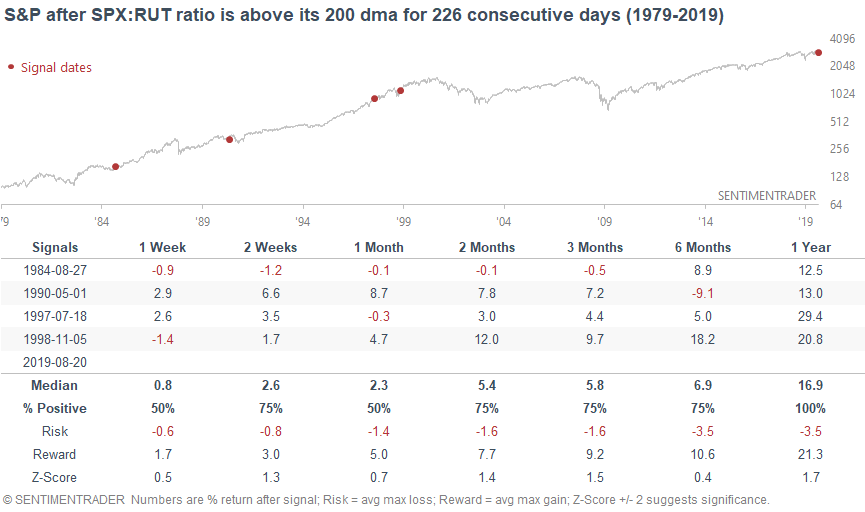 A big part of the reason is diverging paths of forward earnings for the S&P 500 versus it's small-cap brethren. While the 12-month forward earnings trend is negative for smaller-caps, it remains positive for the larger-cap S&P 500, and that has been a good signal.

Below, we can see an equity curve if we buy and hold the S&P versus switching to cash when earnings are negative, or switch to bonds. Currently this is still on a buy signal. 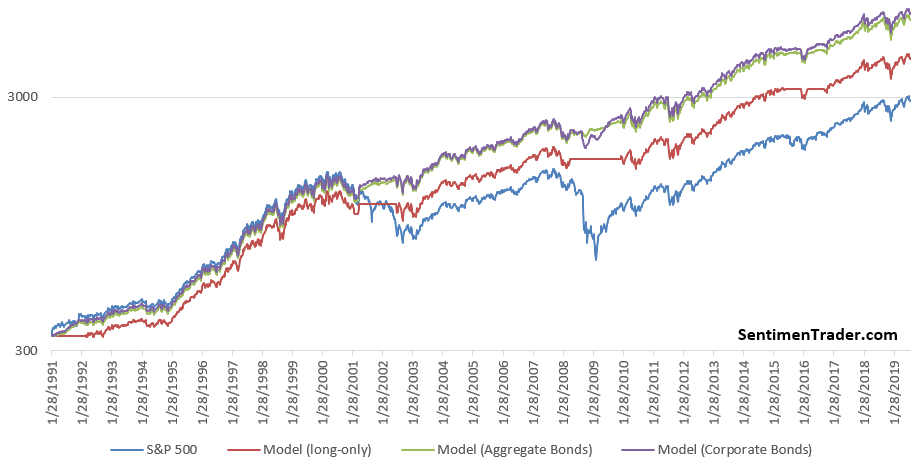 More than 90% of stocks in Hong Kong’s Hang Seng index have managed to climb above their short-term 10-day moving averages, following a time when fewer than 5% of them did so and still less than half are trading above their long-term 200-day averages (showing short-term bursts of buying interests in long-term downtrends). This has triggered 5 times in the past 17 years, all leading to double-digit gains over the next 6 months.

The post titled Gold Beats Stocks' Double-Digit Jump was originally published as on SentimenTrader.com on 2019-08-21.