Even as stocks tickled new highs, a historic thrust in breadth

Another thrust into the new year

Over the past couple of weeks, we have outlined several breadth thrusts in the broader market and some individual sectors.

Now, the relatively broad-based nature of the recent rise has also triggered a thrust in NYSE Up Issues. Over the past 2 weeks, an average day has witnessed 62% of securities advancing. 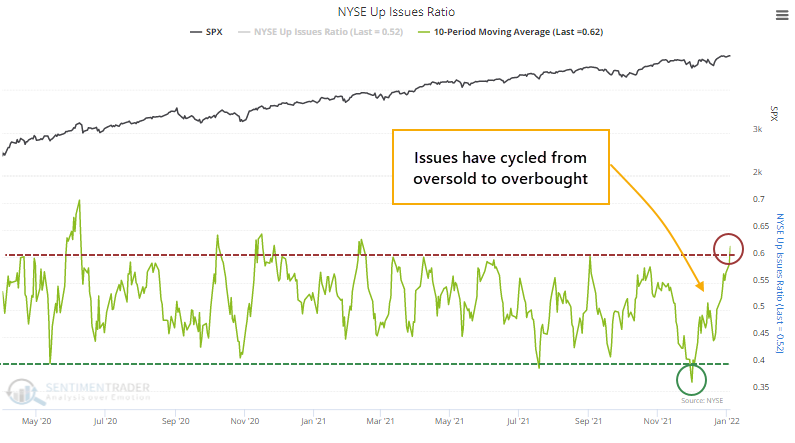 More than 63% of volume has been focused on those advancing securities, also triggering a thrust in NYSE Up Volume.

There are an infinite number of ways to measure breadth and thrusts. We don't subscribe to the idea that there are official rules for either. We test them from many different perspectives with the sole purpose of trying to discover whether investors are eager to own stocks or not and what that might suggest for how they'll behave going forward.

When both the 10-day Up Issues and Up Volume ratios cycle from below 40% to above 60% within 30 days, it suggested that investors will keep buying, especially when the S&P 500 was within correction territory of less than a 10% drawdown from a multi-year high.

Not a great time for gas

Jay took an in-depth look at seasonality in natural gas, and the implications for funds like KOLD.

The chart below displays the annual seasonal trend for natural gas futures. Between the start of the year and trading day of the year (TDY) #41, this market tends to show weakness. 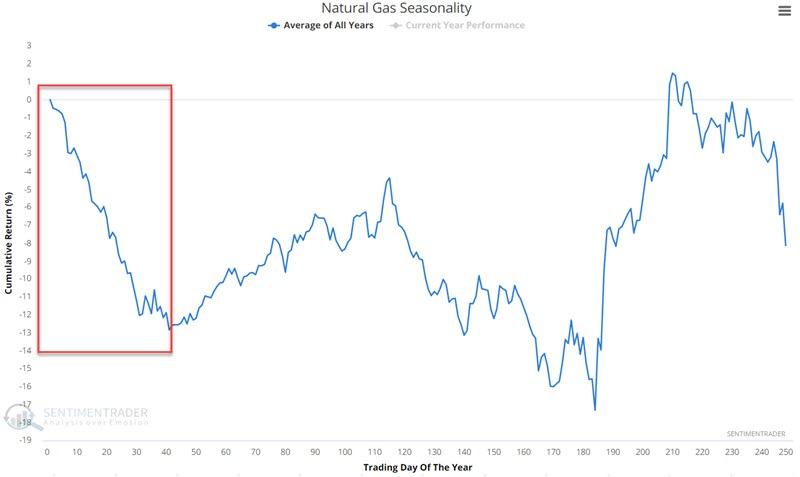 It is always important to remember that seasonality charts are not roadmaps. In other words, they tell you what has happened in the past, not what will happen the next time around. That said, holding the KOLD fund during this window has led to consistent - but still volatile - gains.

The post titled Even as stocks tickled new highs, a historic thrust in breadth was originally published as on SentimenTrader.com on 2022-01-06.