Safe-have assets have lost funds, and large options traders are betting on a market rally.

Over the past week, stocks jumped, and traders fled haven assets like bonds, gold, and the yen. It’s not just the past week, though – since October, ETF traders have been leaving haven types of funds and moving into funds focused more on aggressive stock traders, a complete about-face from August.

In August, we saw how positively stocks tended to respond after big flows into haven funds. When their was the opposite scenario, it wasn’t a strong edge, but the S&P’s forward returns were slightly below random in the short- to medium-term. Even so, the S&P was still higher six months later 94% of the time.

Last week, large options traders positioned themselves in one of the most bullish stances in 20 years. They abandoned protective puts, piled into speculative calls, driving the LOBO Put/Call Ratio to one of the most extreme readings since 2000. 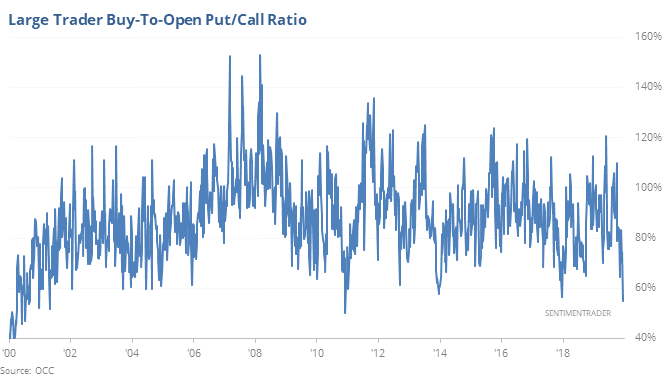 There wasn’t enough there to consider a sell signal, but it should at least be a warning. Over the next two months, the S&P’s risk was higher than its reward, and it got even worse over the next year.

The post titled ETF Traders Are Fleeing Safe Havens was originally published as on SentimenTrader.com on 2019-12-17.