Stories with “contagion” worries are spiking to the highest level in 5 years.

Smart money hedgers have taken an extreme short position in the dollar, which has preceded weak returns over the next 2-3 months. 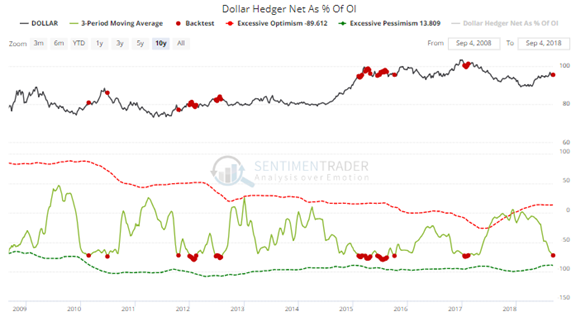 At the same time, they’re betting heavily on metals and various ag contracts, with a good record of success.

The S&P 500 fund, SPY, has suffered six straight days with a lower high and lower low than the prior day. Over its 25-year history, this has happened 12 other times.

The 3-Year Min/Max Screen shows that “smart money” hedgers added yet again to already-extreme positions in the metals. According to the Backtest Engine, when hedgers held more than 6% of the open interest in platinum, its two-year return was positive 41 out of 42 weeks.

The post titled Emerging Market Contagion As Hedgers Bet Against Dollar was originally published as on SentimenTrader.com on 2018-09-10.