The summers of midterm election years are weak more often than not. Supposedly, it’s supposed to get even worse if investors are uncertain about government economic policy.

Since the January peak, stocks have made two lower highs, each lower than the prior one by more than 2%. 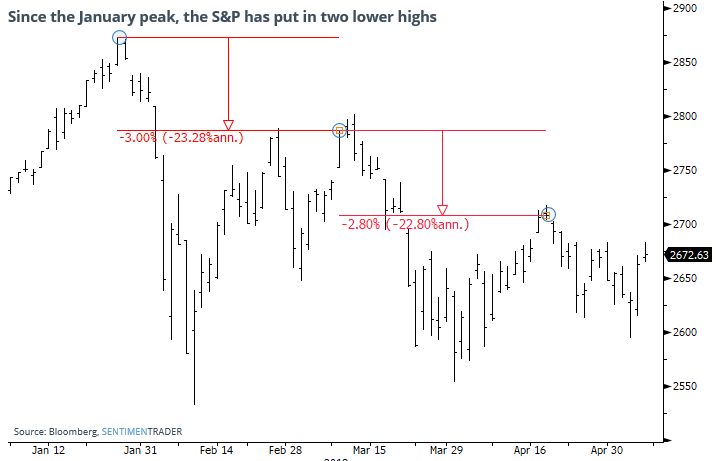 That hasn’t happened since 2009. Prior signals led to poor returns, especially when the past year had been positive or slightly negative.

Eric has created a world map to visualize the current Optimism Index of countries around the world. You can zoom and pan the map, and click on any country to bring up a chart of its Optimism Index over time (and then Favorite it, backtest it, etc., like any other indicator). It’s a great, quick way to see where on the globe that investors are currently focusing. On the site menu, it is under More > Optimism Index Geo-Map.

Way south of the border

If you pull up the Geo-Map, one country that sticks out is Mexico. The Optimism Index on EWW collapsed to 6 on Monday. According to the Backtest Engine, over the past 9 years, a reading below 7 led to a positive return over the next month 18 out of 20 times.

The post titled Economic Uncertainty During Midterm Summers As Stocks Form Lower Highs was originally published as on SentimenTrader.com on 2018-05-08.