The Dow has gone 130 days without a new high or 20% loss, one of its longer stretches in purgatory. Other periods when it got stuck in a correction mostly resolved higher, with a choppy 1-2 months generally leading to new highs. 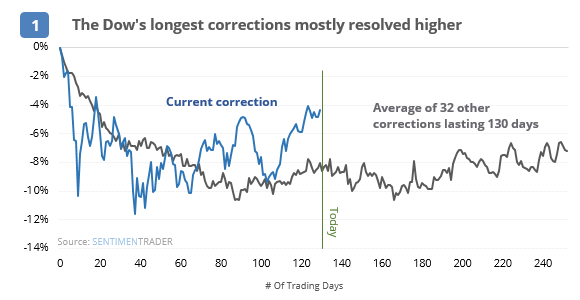 Even as the S&P 500 meanders below its 52-week high, its Advance/Decline Line has not. Over the past month, a near-record number of positive divergences have triggered.

The main ETF focused on Turkish equities (TUR) suffered another large loss on Monday, pushing its Optimism Index to a lowly 2. That’s not often seen on any fund. According to the Backtest Engine, since the financial crises it has been this low 9 times.

Eric has added a couple of great new features to the site. Seasonality charts now include a “today” marker along with year-to-date performance, showing how the ETF (or index or commodity) has performed relative to its usual pattern. Check out corn, or IWM, for example.

He’s also added thumbnail charts for bonds, commodities, sectors and countries, the same as is shown later in each of these reports. It’s a great way to see sentiment for groups at a glance. You can check the What’s New section periodically to see the latest enhancements.

The post titled Dow's Long Correction With Positive S&P Breadth was originally published as on SentimenTrader.com on 2018-08-07.