The late, great Marty Zweig originally coined the phrase "Don't Fight the Fed." What an understatement that turned out to be.

Another phrase I have found useful is "Money moves the market." And money is what is moving the market right now (as a function of massive Fed pumping).

And one last phrase that seems appropriate is "It doesn't have to be rocket science."

If you want to understand the extraordinary nature of the current bull market - and the overall bullish nature of the market since the bottom in 2009 - gaze upon the chart below, which displays the Total Assets on the Federal Reserve Balance sheet and the S&P 500 Index, since 2007. 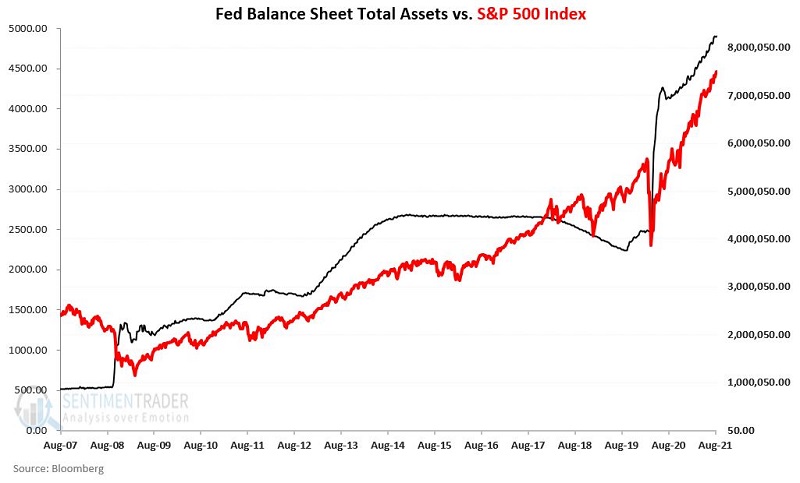 Notice anything? You should. The two data series enjoy a correlation coefficient of 0.863 (a value of 1.00 would indicate that they move in lockstep).

How to interpret this? Simple:

Sometimes the phrase "correlation is not causation" applies.  And sometimes it does not - like here, for instance.  The massive amounts of money that the Fed has pumped into the system in the past 12 or so years has been the lifeblood of this bull market.

Can this go on indefinitely? Absolutely.  Remember, the "trend is your friend."

Will this "Pump and Run" scenario last forever, and is the stock market impervious to a downturn? Um, that's a less happy answer for another day.

Wait, so does all of this ultimately end badly? Same answer as the last question.

For now, one last phrase to remember is:

Jay's Trading Maxim #18: Follow the trend. Respect the trend. But DO NOT fall in love with the trend.