There is a long history of using anecdotal "evidence" as a contrary indicator. Through the decades, traders have used the enthusiasm of shoeshine boys, taxi cab drivers, and cocktail party conversations as their basis that sentiment had reached an extreme.

"You know it's time to sell when shoeshine boys give you stock tips. This bull market is over." Joe Kennedy

It can still be useful. Our family Christmas party in 2017 was dominated by talk of bitcoin. This coming from people who had never bought a share of stock in their life, much less anything more exotic. A brother-in-law even pulled me aside to conspiratorially tell me about an ICO opportunity he could get me in on. That was sign enough for me.

But this can go too far. It can get to the point where a knee-jerk contrarian sees an extreme in every whisper.

A favorite punching bag is the magazine indicator. If we see a bull on the cover - sell! Sorry, but it's just not that easy.

There is something to this, but it's subtle. The Economist, to their credit, posted a study a couple years ago which confirmed that their cover stories did, indeed, present contrarian investment opportunities. It wasn't a slam-dunk, but an investor did better buy buying negative cover stories and selling positive ones over the next year.

This week, the Barron's cover seems disturbing for bulls, with "Is The Bull Unstoppable" in big, bold letters right there for everyone to see. 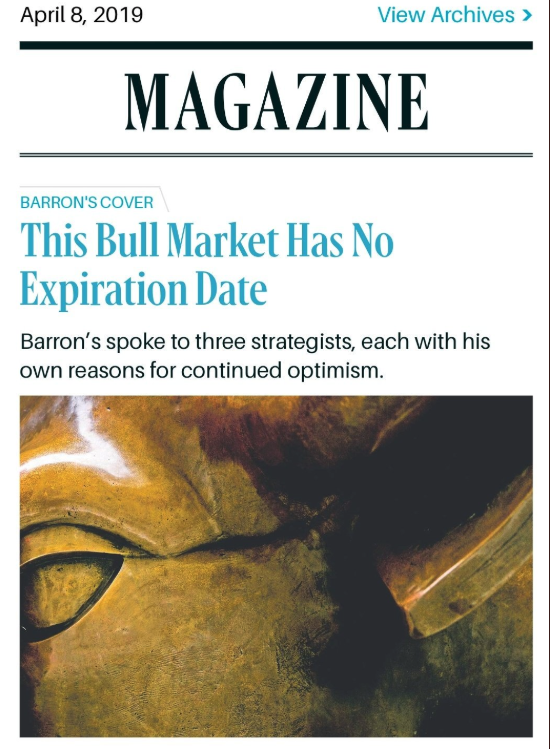 It doesn't matter what the article itself is suggesting, the only important thing is the cover. That's what the editors choose to use to generate the most interest, and the best reflection of prevailing sentiment.

Here's the rub, though. Barron's doesn't work as a contrary indicator. We've done some in-depth studies on various stocks and sectors in years past, with the conclusion that it's better to NOT fade the cover.

Or, we can just look at the chart below. This shows the most egregious bull market covers on Barron's since the end of the financial crisis. And every one of them was right. 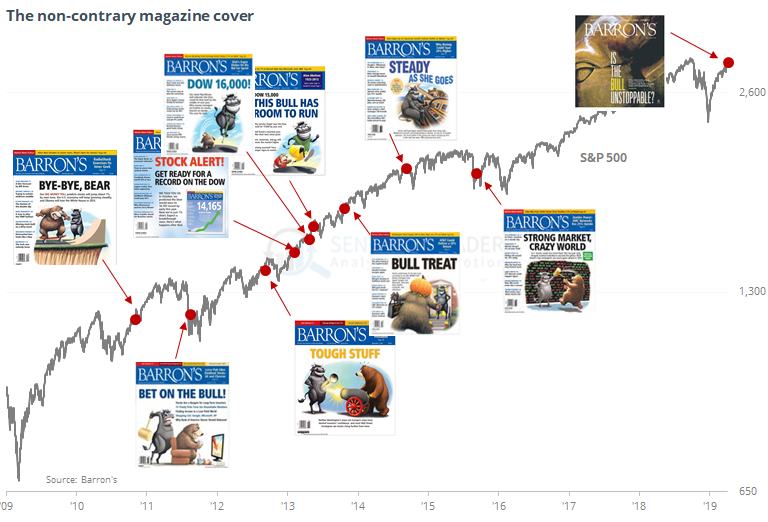 Don't be a knee-jerk contrarian.

The post titled Don't Be A (Knee) Jerk was originally published as on SentimenTrader.com on 2019-04-06.