Ignoring the rise in rates

Despite a steady rise in interest rates, the U.S. dollar has declined more than 10% over the past year.

That’s unusual, especially given the magnitude of the fall in the dollar and the rise in rates. The other times it happened, the dollar continued to decline, stocks did okay, while gold and commodities did best.

For the past two days, stocks have opened higher but weren’t able to sustain buyers’ initial enthusiasm. 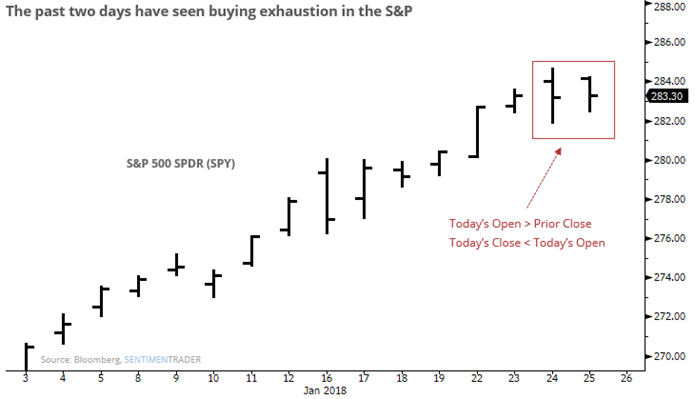 When occurring at a high, such days tend to lead to short-term weakness.

The Dow Industrials closed at a new high on Thursday, while the Dow Transports have lost more than 1% on each of the past two days. Incredibly, that has happened only 4 other times since 1930.

Not sure this matters anymore, but the Dow managed its back-to-back new highs with more declining issues than advancing ones on the NYSE both days. That has happened four times over the past couple of years.

The post titled Dollar Ignores Rates As S&P Shows Exhaustion was originally published as on SentimenTrader.com on 2018-01-26.