Despite gains and the holidays, investors are glum

Investors are pessimistic despite positive trends and seasonality

Even as those indexes have trudged higher, sentiment hasn't become as optimistic as it was early in the year. In particular, the folks who frequent the surveys from the American Association of Individual Investors have been faithful to their conservative nature. The AAII Bull Ratio has held below 50% for 5 straight weeks. 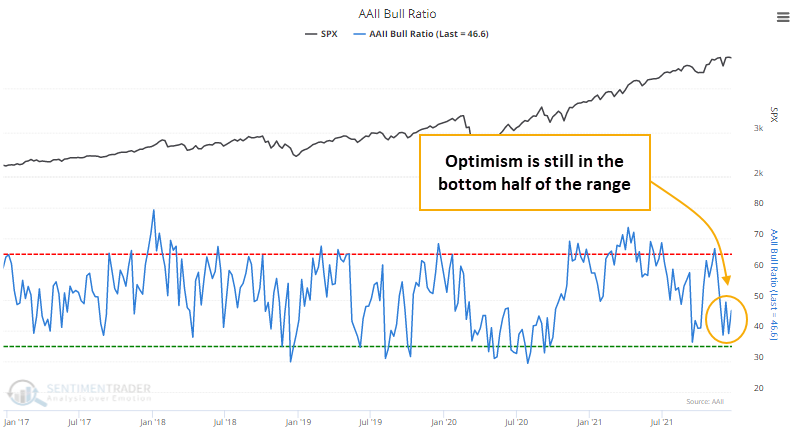 Not only is it unusual to see this behavior when the S&P 500 is holding near all-time highs, but even crabby people tend to turn more optimistic during the holidays. Not this year - this is only the 2nd year time the inception of the AAII survey that the Bull Ratio was negative for the first 4 weeks of December. Returns after similar behavior were mostly positive.

There is often a disconnect between what these folks say and what they do. Despite tepid optimism in recent months, their stock allocation is near all-time highs. Go figure. Even so, future returns are more correlated to their opinions than their allocations.

When investors are bullish on stocks, they buy call options to bet on rising prices. Conversely, when they are bearish on stocks, they buy put options to bet on declining stocks. The put/call ratio can be used as a contrary indicator to identify an environment where sentiment has become too pessimistic on the future direction of stocks. When opinions become too bearish, stocks tend to rally.

The aggregated put/call ratio indicator measures the summed options data for constituents of the index/ETF. For stocks in the Consumer Discretionary sector, the ratio is cycling lower after a high reading. 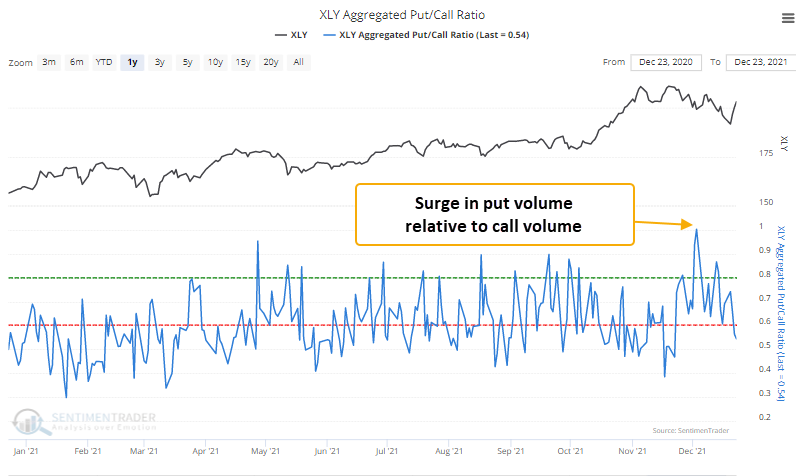 Dean's put/call ratio trading model applies a lookback period to a moving average of the XLY aggregated put/call ratio. A new buy signal occurs when the ratio cycles from a high to low level relative to other readings in recent months, as long as momentum is positive.

This signal has triggered 16 other times over the past 9 years. After the others, future returns and win rates were excellent across all time frames.

The post titled Despite gains and the holidays, investors are glum was originally published as on SentimenTrader.com on 2021-12-28.