Crude oil has suffered one of its most epic collapses in 30 years and is the most oversold ever. It has lost a quarter of its value from a 52-week high in only 30 days, one of the fastest drops ever. And its Relative Strength Index has declined to the lowest level ever, dating back to the inception of the futures contract in 1983. 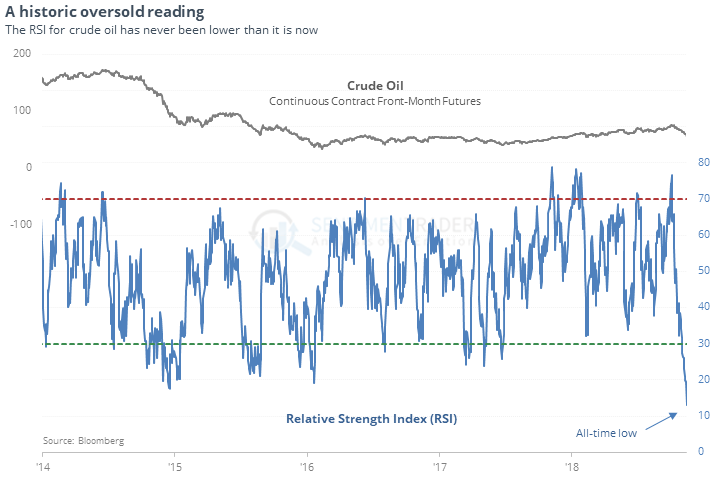 When we look at forward performance following all similar crashes, for the most part, there was a modest suggestion that this kind of selling pressure is exhaustive.

Fear of a collapses is spreading

While sentiment on oil is dropping rapidly, “smart money” hedgers haven’t reduced short positions too aggressively, and optimism is still above washed-out levels. That should change soon, as there are starting to be some signs that fear is rising quickly. The Crude Oil VIX just spiked above 55, its highest in two years.

On the Commodity Sentiment & Seasonality Screen, gold is showing up as having low optimism during a positive time of year. Over the past 20 years, when gold’s Optimism Index was 30 or below in November, it showed a positive return 2 and 3 months later after 32 out of 34 days.

The post titled Crude Collapse was originally published as on SentimenTrader.com on 2018-11-14.