Consumers pull a 180 on stocks, but are trading like crazy

In February, we saw that retail investors were busy trading stocks. Activity in the major retail-facing brokers had exploded, which had negative implications since it suggested a "get me in while the getting is good" kind of mentality.

It's difficult to rely on this data any longer since the brokers moved to free commissions. But just-released data shows that not only did investors pare back during the decline, but they doubled down - literally. Activity in March was more than double what it was just a few months prior.

Aggregating the Daily Average Revenue Trades (DARTs) for E-Trade, TD Ameritrade, and Schwab, we can see that the explosion in activity that was no doubt triggered by free commissions continued unabated as the pandemic unfolded. 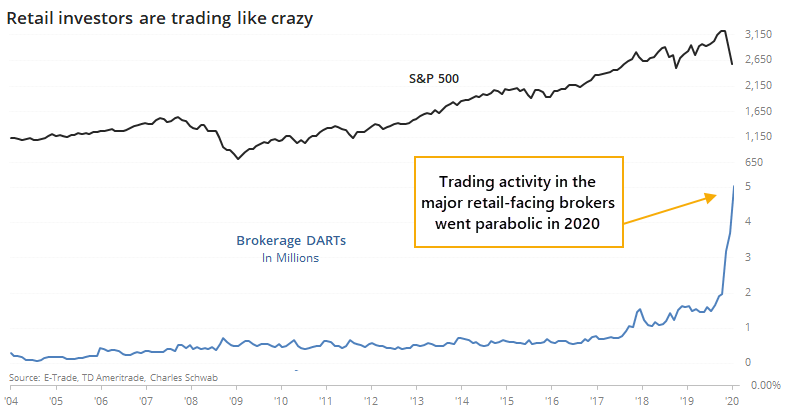 Even so, overall volume on the NYSE jumped in March as well, so retail activity actually dropped relative to the total. Maybe that's a good sign, but it's hard to tell from the data because there aren't really any precedents for this kind of activity.

According to what they're saying, anyway, investors (and by extension, consumers), have pared back their expectations for stocks. In February, we saw that consumers had never been more confident about a continuing rally. Over the past two months, they've reduced those expectations quite a lot.

The post titled Consumers pull a 180 on stocks, but are trading like crazy was originally published as on SentimenTrader.com on 2020-04-27.