Commodities haven't done this in 50 years

Commodities continue to be in the news, and rightfully so.

While lumber is getting all the headlines, commodity participation is broad. The 252-day rate of change for the Bloomberg Commodity Index just crossed above 46%, a level last reached in 1980.

The question we should be asking is the following: Does the current surge represent the initial stages of a new commodity bull market like the early 1970s, or does it represent the typical post-recession recovery roadmap?

When we look at major commodity contracts and measure the percentage of them with a 252-day rate of change of 50% or more, we can see that the percentage has reached the highest level since the 1970s. Never before in the past 50 years have more than half of them jumped by 50% in a year. 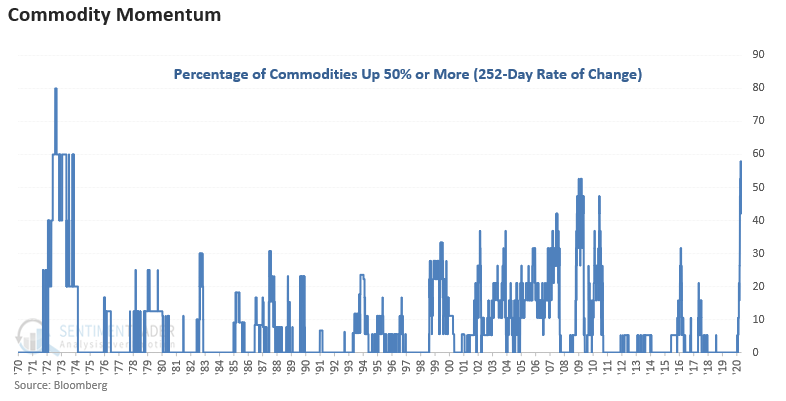 Trouble is, this hasn't been sustainable.

When we look at other instances when the year-over-year change in the Bloomberg Commodity Index was very high, the index showed further gains over the next couple of months only 2 times out of 12 precedents.

The post titled Commodities haven't done this in 50 years was originally published as on SentimenTrader.com on 2021-04-26.