Commodities Have Done This 9 Other Times Since 1933

On Tuesday, we saw that the 4-month start to stocks this year has had some impressive precedents. While most of the similar years witnessed some consolidation during the summer months, the long-term implications were positive.

Commodities have arguably had an even more impressive start. The long-term trend in stocks is well-documented to be higher as companies innovate and produce profits, but commodities are much more cyclical. As prices rise, farmers plant more crops, or miners dig more stuff out of the ground, and prices go down. It's hard to sustain uptrends except when there is a massive supply/demand imbalance.

We can see the last 4 analogs in the chart below. 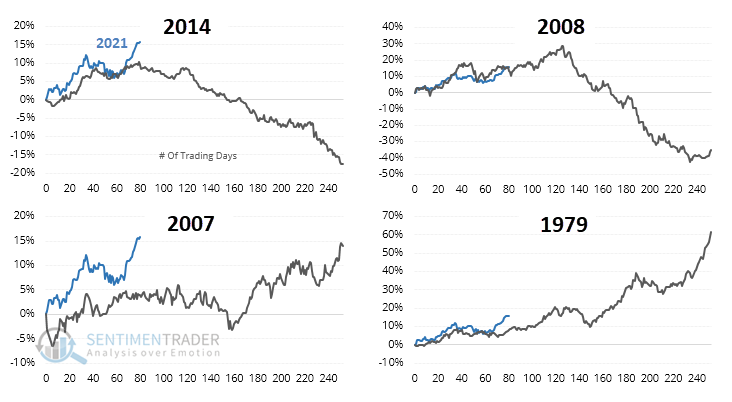 The years all showed gains through April and enjoyed a roughly similar path to get there, but the only year with a better 4-month beginning was 1973. Commodity bulls would love to see a repeat, as it preceded massive additional gains.

The post titled Commodities Have Done This 9 Other Times Since 1933 was originally published as on SentimenTrader.com on 2021-05-07.