There is no doubt that the pandemic panic has been good to some corners of the market, particularly technology-related stocks.

Other stocks, including industrials and financials, have struggled. It's no wonder that scorn heaped on Warren Buffett is the highest ever, thanks to conglomerates like Berkshire Hathaway being heavily invested in both sectors. Below, we can see the total number of news articles mentioning some kind of most likely derogatory mention of Buffett including terms like BAD YEAR, CRUSHED, LOSE, LOST, TOUCH, LOST TOUCH, OLD, RETIRE, PERFORMANCE, UNDERPERFORM. 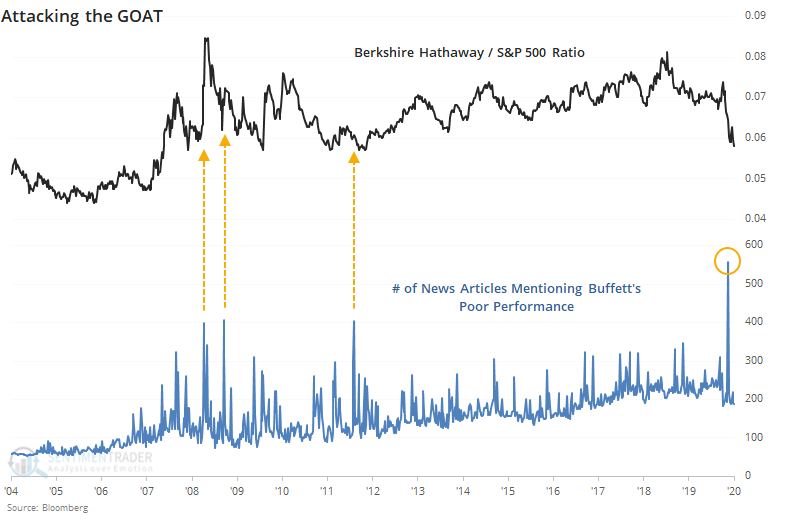 The difference in investor preferences toward tech and away from other sectors has pushed the weights of these sectors to multi-decade extremes, or nearly so.

The tech sector now makes up 27% of the weight of the S&P 500. That has been exceeded only by the bubble stretch from late 1999 through the fall of 2000. Financials have sunk to barely 10% of the S&P, nearly the lowest since 1992, eclipsed only by February 2009 when it accounted for only 9.8% of the index. Industrials have been a consistently less important part of the S&P, but 2020 has been a real killer, and the sector now makes up only 8% of the index, the smallest influence in 30 years.

If we look at the spreads between the weight of technology versus financials and industrials, we see that the differences relative to history are nearing the most extreme point in 30 years.

The post titled Buffett scorn reflects a market heavily weighted toward tech was originally published as on SentimenTrader.com on 2020-06-23.