Stock indexes have reached record highs, but there isn’t much oomph in the move. The McClellan Oscillator has been negative for nearly 3 weeks, which is a long time given the run to new highs in the S&P. When the index hits a new high with a streak of negative breadth momentum like this, returns were weak.

Bear within a bull 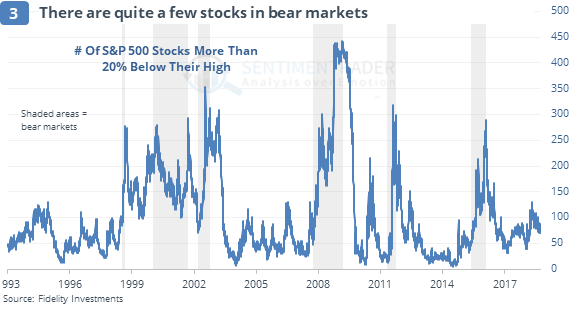 That is well below the 250+ that are typically stuck in bear markets when the S&P is struggling, but it’s an abnormally large number for a time when the S&P itself is at a new high.

An extended period of speculation

The smallest of options traders spent 42% of their volume buying speculative call options to open in the week ended September 14. That tied for the most since the 2009 market bottom.

The Optimism Index on the main REIT fund, VNQ, dropped below 9 on Monday while XOP is above 85.

The post titled Breadth Lacks Oomph As Many S&P Stocks Still In Bear Markets was originally published as on SentimenTrader.com on 2018-09-25.