Brazilian and other emerging market stocks have been hit

While economic reports in emerging market countries are gaining strength relative to countries like the U.S., many of the stocks in those markets have been declining. As a result, the McClellan Summation Index for emerging markets has dropped well into oversold territory.

The oddity is that even while emerging market indexes have held up, it's not because of most stocks rising. The Cumulative Advance/Decline Line has plunged in recent months, diverging from the indexes. 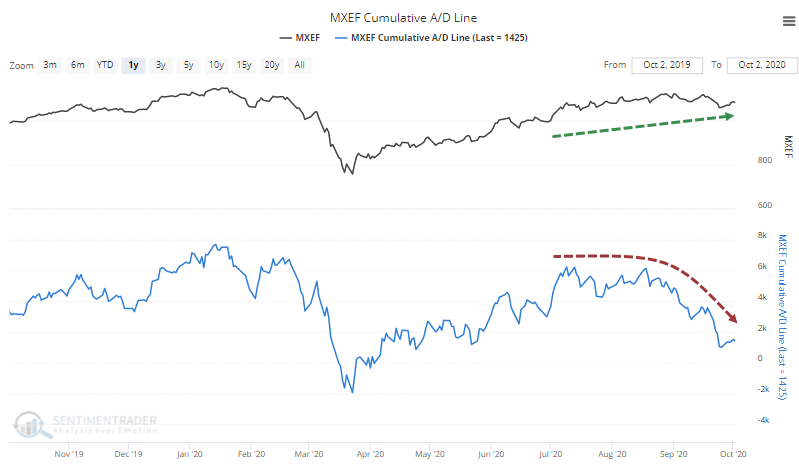 Over the past 50 days, an average of 80 more stocks declined each day than advanced. That's a historically extreme reading that's just now starting to improve. Our Backtest Engine shows good forward returns when this has triggered before.

Part of this weakness comes from Brazil, where the Cumulative A/D Line has been even worse, now below even the March lows.

Such persistent internal weakness has pushed the McClellan Summation Index for the Ibovespa down to a rarefied extreme. Once again, the Backtest Engine shows impressive forward returns. The only real exception was in August 2015 when there was no real reaction to the oversold conditions.

The post titled Brazilian and other emerging market stocks have been hit was originally published as on SentimenTrader.com on 2020-10-06.