For the first time in more than 9 months, optimism on bonds has come down to neutral territory. That ends one of the longest streaks in almost 30 years of high optimism.

Other times sentiment on bonds normalized after a long stretch of optimism, there was usually a short-term snapback as bargain hunters spied their first good entry. But few of them managed to take hold, with losses over the next 3-6 months most of the time. Even the gainers saw only limited upside longer-term, and risk was well above reward. Stocks mostly gained after these signals.

Despite the S&P 500 nearing a fresh all-time high, an unusually large number of stocks in the index are still down more than 10% or even 20% from their own highs.

Bears would suggest this is a worrying sign of non-confirmation, but it has usually not panned out that way when it’s triggered before.

Historical reactions show that bulls have a bit of a better argument. The shorter-term saw consistent gains, but there were a few troubling failures.

The 3-Year Min/Max Screen shows that “smart money” hedgers established a new multi-year (and all-time) extreme long position in sugar. As a percentage of open interest, it’s the 2nd-highest in 14 years. When hedgers have been net long, sugar’s annualized return has been 12.7% (rising to 27.6% since sugar peaked in 2011), versus 5.9% when hedgers are short. They also have heavy long positions in the British pound and cocoa. This week, they covered some of their massive short position in gold, but got even more short silver and platinum. According to the Backtest Engine, when they’ve held more than 40,000 contracts of platinum net short, it managed to rise over the next 2 months only 27% of the time.

Here is our Macro Index, which aggregates 11 leading indicators. Overall, there is no significant U.S. economic deterioration right now. What will happen to macro in the future? I don't know. Instead of trying to guess the future, macro tells us how to react and trade day-by-day depending on what's happening right now. 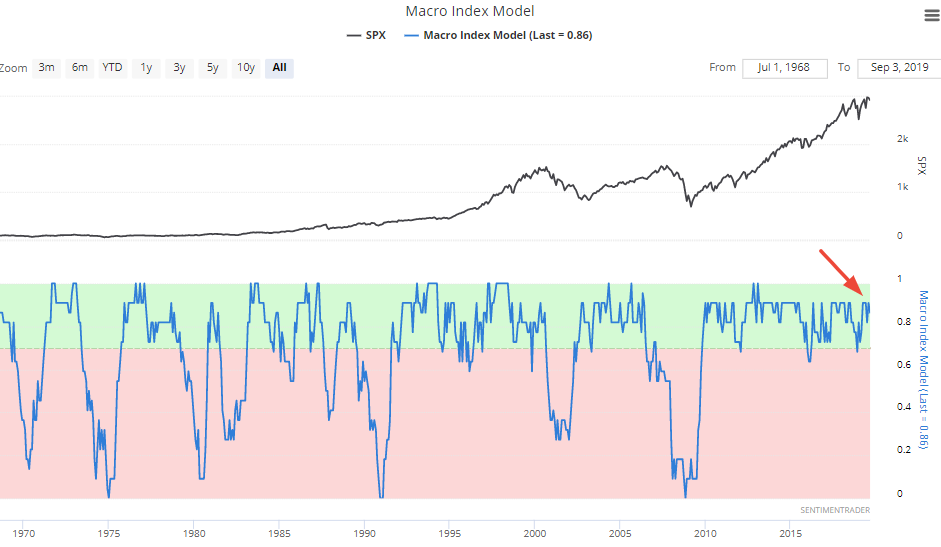 The main weak points in U.S. macro revolve around trade, manufacturing, and the yield curve. Housing and financial conditions are semi-weak, but there has yet to be significant deterioration. 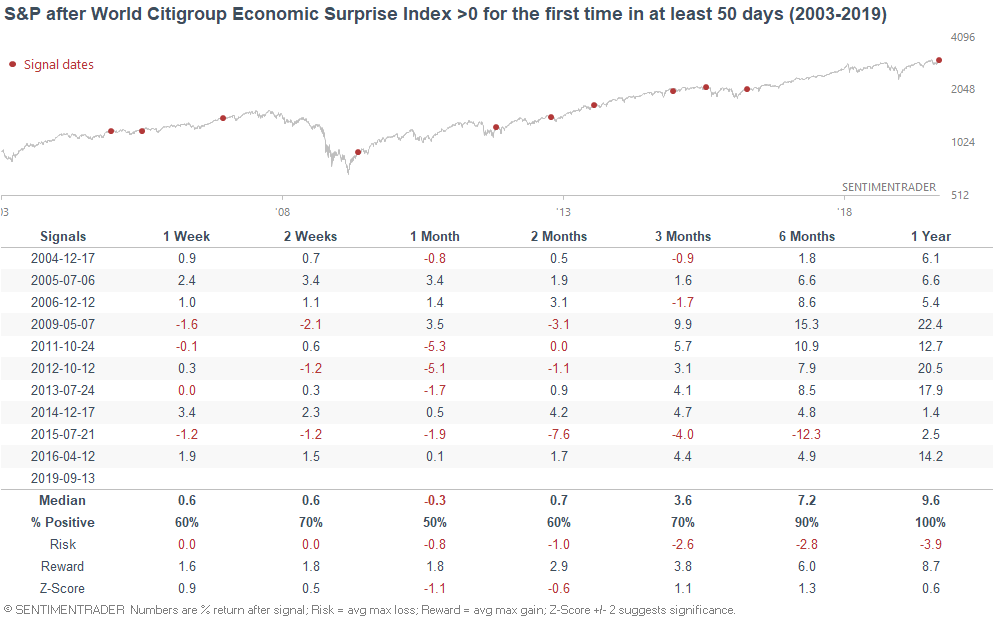 The post titled Bond Bulls Curb Their Enthusiasm was originally published as on SentimenTrader.com on 2019-09-16.