After falling into a correction a week ago, the Dow Industrials index has rallied every day and added 5.6%. That ranks among its best-ever recoveries after falling more than 10% below its high for the first time in months. 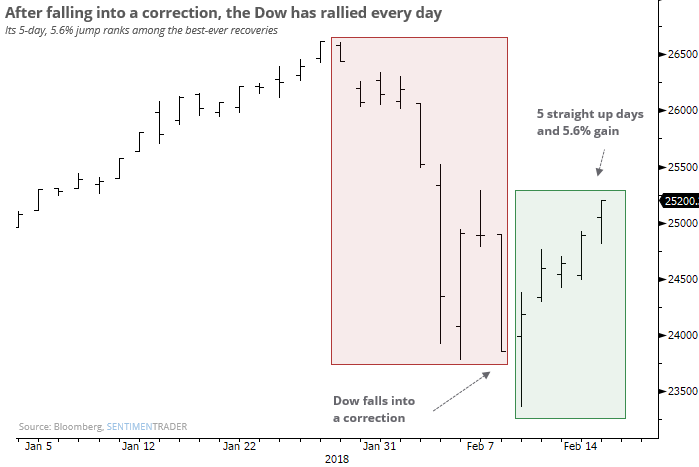 Over the past two weeks, an average of almost 2 out of every 3 investment-grade bonds have declined each day. That’s among the worst stretches in 13 years, barely above the worst-ever reading.

Investors have taken note by yanking 8% of assets from LQD, its worst two-week decline in assets ever.

Fear has been cut in half, which has not necessarily been a good sign for the broad stock indexes. Among factors, small-cap growth stocks fared best.

A 5-day average of the NYSE Up Volume Ratio has gone from an extremely oversold level (below 30%) to an extremely overbought one (above 70%) within two weeks. That has happened 28 times since 1962.

The post titled Best Recovery Ever As Investors Flee Bonds was originally published as on SentimenTrader.com on 2018-02-16.