Some early optimism on Thursday was quickly erased, and stocks dove to new lows for this move. In the process, it triggered several extremes:

* The Nasdaq is on the threshold of a 20% decline.

* The percentage of securities falling to a 52-week low on the NYSE and Nasdaq spiked to the most since 1987 and 2008.

* The AIM Model this week is going to be 0%, which the Backtest Engine shows has happened only twice since the model became less noisy in the late 1980s. Those two weeks were September 4, 1998, and October 7, 2011. The S&P rallied more than 8% over the next 1-2 months after those dates, for what that’s worth.

* This is triggering the most eager put buying on index ETFs since March 10, 2009.

* The combination of readings has triggered a jump in the percentage of indicators showing pessimism and pushed the Risk Level to 1. 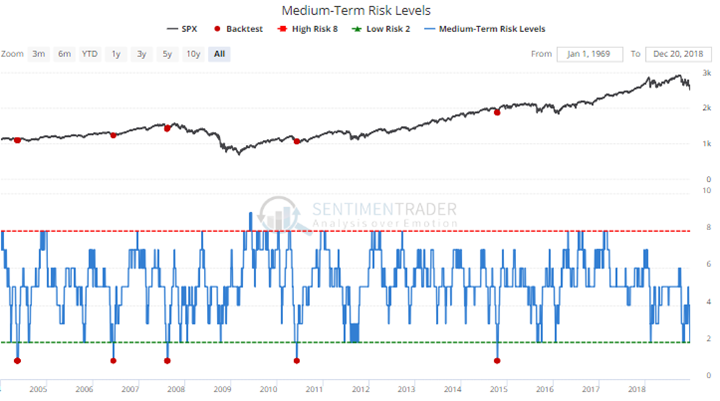 The post titled Another Volatile Session was originally published as on SentimenTrader.com on 2018-12-21.