An extreme in extremes

The swiftness of the decline this week is unusual in many respects, perhaps none more so than the fact that it originated from all-time highs. Very often when we see severe declines over a compressed time period, it’s after stocks have already been declining for a while.

This has been one of the fastest-ever declines into correction territory for the major indices, especially the Dow Industrials, even using price history back to the year 1900.

Even just looking at the 5-day drop of more than -5%, this qualifies as one of the most severe, most compressed declines from an all-time high since 1928 for the S&P 500.

It’s also worth mentioning that this is the fastest that the S&P 500 has ever cycled from an all-time high to wiping out at least 4 months’ worth of gains. It’s happened only twice before in less than 10 days.

Granted, we can't take much from a sample size of two. But when we look at the decline this week from a variety of perspectives, the implications point almost exclusively in the same direction.

The stock market's continued decline has pushed indicators that were in somewhat-extreme-territory into very-extreme-territory. For example, more than 62% of the S&P 500's members are oversold (RSI < 30). This is a level that has only been matched a few other times in history: 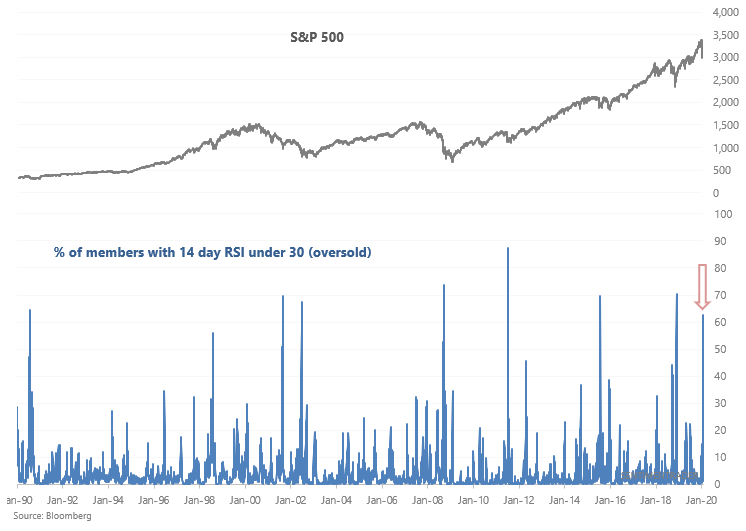 So what does this all mean? As one would assume, this is short term bullish for U.S. equities.

While it doesn't mean that the exact bottom has arrived (no one can consistently and accurately predict exact tops and bottoms), it does mean that risk:reward is starting to favor bulls. Here's what the S&P did next when many of its constituents were oversold:

The post titled An extreme in extremes was originally published as on SentimenTrader.com on 2020-02-28.