A Remarkable Run, As Bulls Return And Dow Stocks Are Above Average

Both the S&P 500 and Russell 2000 have enjoyed a near-historic run from their Christmas Eve lows. The magnitude of their gains, interrupted by only a few large daily losses, have been matched only a few times. 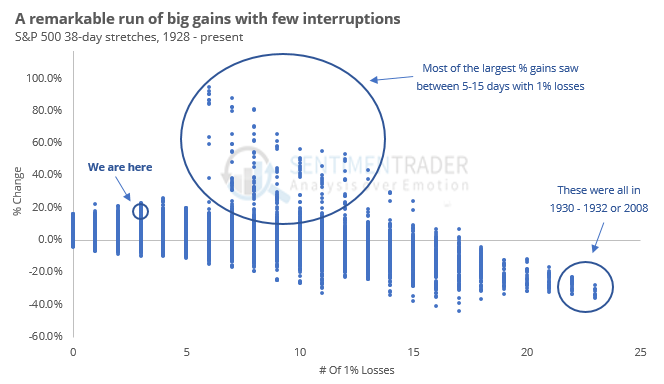 The sample sizes are tiny, but the implications are mostly positive, especially for the small-cap Russell index. Context matters, too, and our current stretch is notable because it’s coming off a time when the S&P and Russell are recovering from a 52-week low. For the Russell, in particular, its forward returns after similar instances was stunning.

For the first time in four months, more than half of newsletter writers are bullish, per Investor's Intelligence. This comes after fewer than a third of them were bullish in December. Other times the majority started to expect higher prices, stocks struggled short-term.

Few dogs in the Dow

Almost all Dow Industrial stocks are trading above both their 10- and 50-day moving averages. Because of the December decline, though, barely 80% of them are above their 200-day averages. That has set up mostly negative returns for the Dow over the next couple of months.

Gold has done well so far this year, but now it hits a hard part of the calendar. The seasonal pattern for gold peaks this week.

The post titled A Remarkable Run, As Bulls Return And Dow Stocks Are Above Average was originally published as on SentimenTrader.com on 2019-02-21.