Finding fault with the rally in tech has been difficult, as it has powered higher with decent participation (shorter-term, anyway). About the only warning signs have come from "too far, too fast" types of measures, and even those haven't been consistent warning signs.

As pointed out on Twitter, though, there are some emerging signs that participation among these stocks is lagging. Despite new highs virtually every day in funds like XLK, the percentage of members in the tech sector that are holding above their 50-day averages is dropping and is well of the highs. 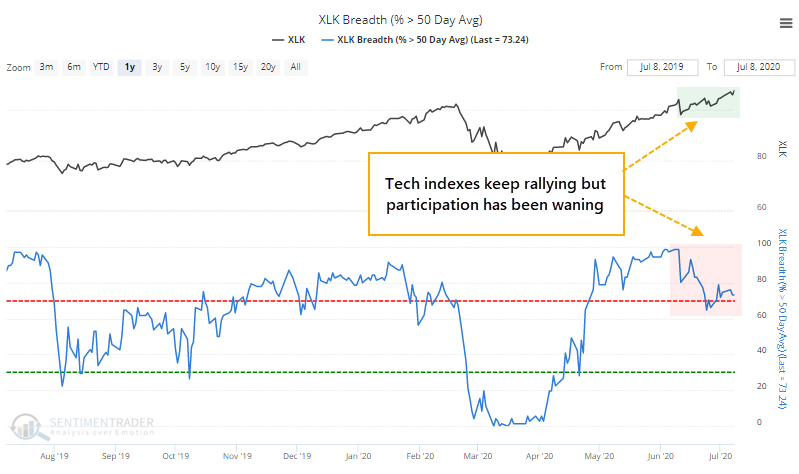 More than 95% of tech stocks were above their 50-day averages a month ago, and now fewer than 75% of them are.

This kind of divergence was an effective warning sign at a few peaks (2007, 2015, 2018, 2020), which would have saved us from pretty drastic declines in the months ahead. Unfortunately, it also failed as a warning multiple times. About the worst we can say is that 7 out of the 10 signals showed a negative return in tech stocks somewhere between 1 - 3 months later.

The post titled A potential sign of trouble in tech land was originally published as on SentimenTrader.com on 2020-07-10.