A historic level of tension

There has been tension between the main focal points of our work for months now. In almost 20 years of publishing, this tension has never been so pronounced, or so prolonged.

Our main focus is sentiment. While there are always odd outlier indicators, there is little question that starting in December and arguably continuing today, we're seeing some of the most speculative behavior we have in a generation.

We've been watching carefully for months to see if the extremes in sentiment would lead to a deterioration in participation among stocks and bonds underlying the main indexes. So far, there have been only isolated pockets, and just when it seems like we would get major warning bells, the market recovered.

We track some unique breath measures, not only looking at stocks within indexes but also indexes within groups. And in the past couple of days, those have reached near-record impressiveness. Among industries, sectors, and global indexes, we are now seeing among the best participation on record.

The positive ones are all very positive, and the negative ones are almost nonexistent. For example, 100% of major industries are trading above their 200-day averages. 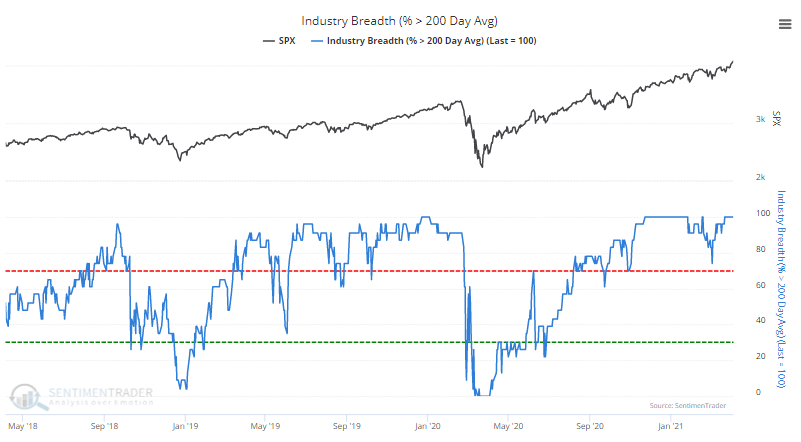 If we average all the positive metrics and subtract the negative ones, then we can get a breadth aggregate. For the 20+ major industries in the U.S., this aggregate just hit +80, among the highest readings in 30 years.

The post titled A historic level of tension was originally published as on SentimenTrader.com on 2021-04-07.