A historic 7 days as sentiment plunges

The past 7 sessions have seen some of the wildest swings since the inception of S&P 500 futures in 1982.

All but one of the days saw an intraday high or low that was around 3% or more from the prior day’s close, averaging nearly 3.4%. Only the most wicked swings in the past 40 years can match it.

Most of these moves have been to the downside, with 4 of the days suffering a decline of at least 3 standard deviations. This is tied for the tightest cluster of "shocking" losses in history.

This kind of volatility is extremely uncomfortable, especially for newer investors. And there’s no telling if it’s going to morph into something more serious. The only consistent thing that behavior like this has meant in the past was that we typically saw prices work higher over the medium-term.

The stock market's wild intraday swings are normal. Very rarely does the market crash and then make a V-shaped recovery. Short term sentiment readings are fluctuating with these daily price movements, but when we apply a 10 day moving average to various sentiment readings, sentiment remains extremely low. 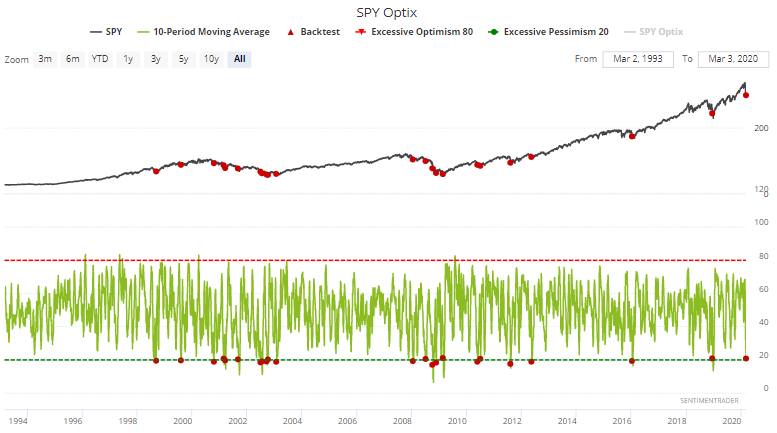 Excluding overlapping signals, this was mostly bullish for the S&P 500 2 months later, with a median gain of +5.29%:

According to our Backtest Engine, returns were even better if SPY's 200-day average was sloping higher like it is now.

The post titled A historic 7 days as sentiment plunges was originally published as on SentimenTrader.com on 2020-03-04.