Over the past week, there have been an increasing number of signs of a “split” market, with many winning and losing stocks. That has caused the HiLo Logic Index to spike for the NYSE and, especially, the Nasdaq.

On both Wednesday and Thursday, the Nasdaq triggered double warnings, which as we saw preceded very poor risk/reward ratios for both the Nasdaq and the S&P 500 over the medium-term. Those warnings are based on earlier work from Norman Fosback, who is credited with introducing the HiLo Logic Index.

It is intended as a way to observe "split" market conditions, it looks for times when there are both a large number of 52-week highs AND 52-week lows among securities on the exchange. When there are a lot of both, the market is severely split between winners and losers, and it tends to be a negative for stocks. When there is a very low number, then the market is heavily one-sided, which tends to be a positive for stocks.

For the NYSE, that indicator is climbing. After any time the NYSE indicator was above 2.5, future returns in the S&P 500 were negative up to three months later according to our Backtest Engine. And it’s even more extreme for the Nasdaq.

Over the past 20 years, it has been a mostly effective warning sign.

This week I once again looked at the steepening 10 year - 3 month Treasury yield curve, which formed a golden cross for the first time in more than a year:

Steepening yield curves aren't great for the stock market, since this often happens during recessions: 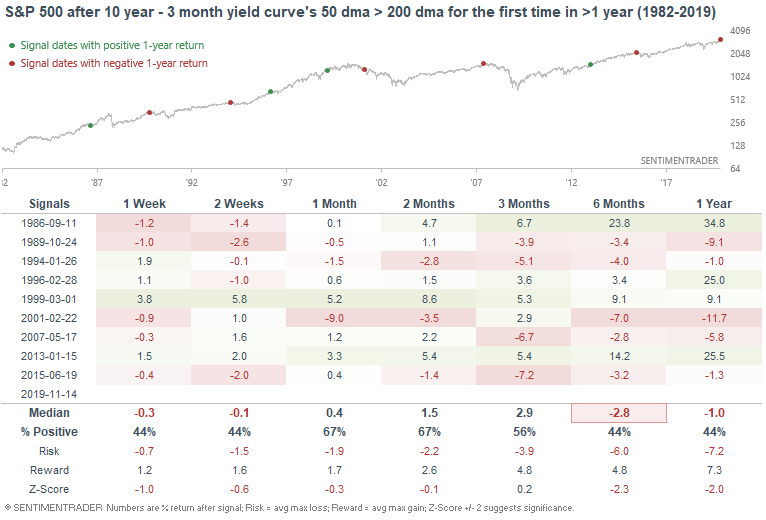 The post titled A High HiLo was originally published as on SentimenTrader.com on 2019-11-18.