The latest survey from Bank of America Merrill Lynch that polls large money managers with nearly $700 billion under management showed a large jump in optimism over the past month. Their outlook on U.S. stocks jumped to one of the largest degrees in 12 years.

We’ve seen in years past that big money managers, such as polled by Barron’s or other organizations, do not really deserve a “smart money” moniker. They’re not consistently a contrary indicator, but that’s the case more often than not. And big jumps in optimism in this survey have preceded modest weakness in the weeks ahead.

Several major indexes, both domestic and overseas, are seeing renewed momentum in the breadth of rising vs falling stocks. Their McClellan Summation Indexes are rising quickly and have exceeded the highest levels they’d reached over the past 1-4 months, including indexes like the Shanghai Composite.

As we see so often, for U.S. indexes, it’s been mostly a good sign after maybe some short-term relief of overbought conditions. Overseas indexes have struggled much more after readings like this. Both the Shanghai and Mexbol tended to struggle after bouts of renewed momentum. 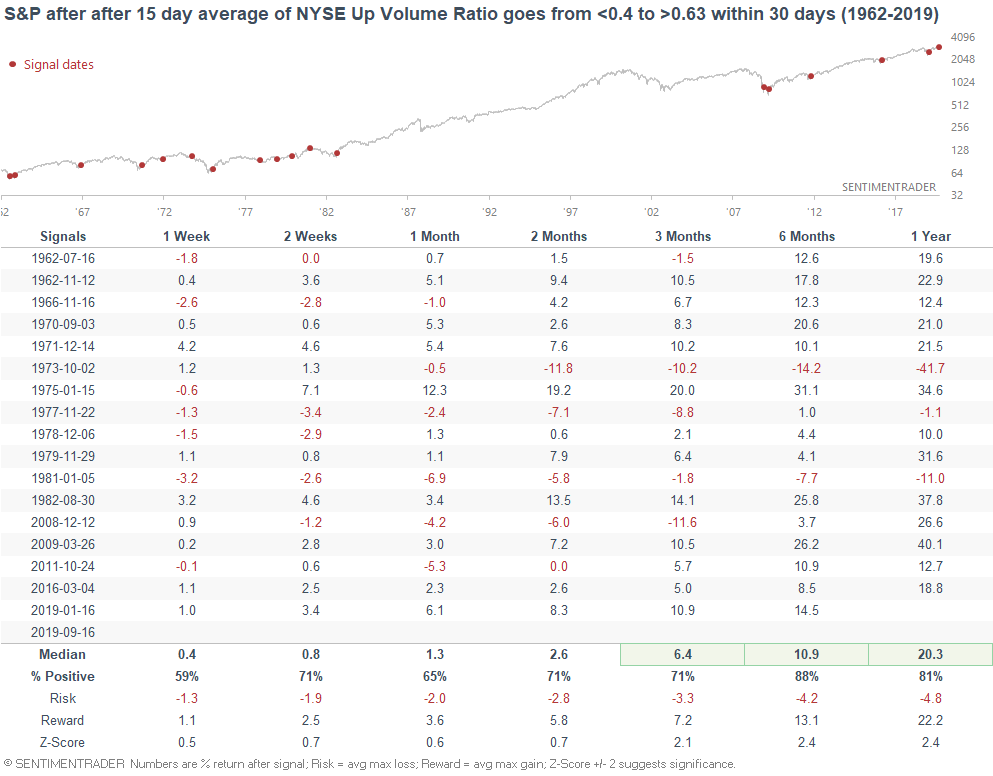 One potential negative is that options traders have seemingly become much more optimistic, with the De-Trended Put/Call Ratio falling heavily in recent weeks. That has, indeed, usually preceded negative returns, but when the S&P was within 10% of its peak at the time, it led to gains. Context is important. Plus, the smallest of options traders are still buying quite a few protective put options. This much put buying when stocks were in an uptrend led to gains in the S&P 41 out of 48 weeks according to the Backtest Engine.

The post titled A Big Jump In Big Money Bulls was originally published as on SentimenTrader.com on 2019-09-18.