The selling pressure earlier this week in the energy sector triggered several shorter-term extremes in breadth. Most of those stocks fell to their lowest in a month, below their volatility bands. Few held above their short-term moving averages. 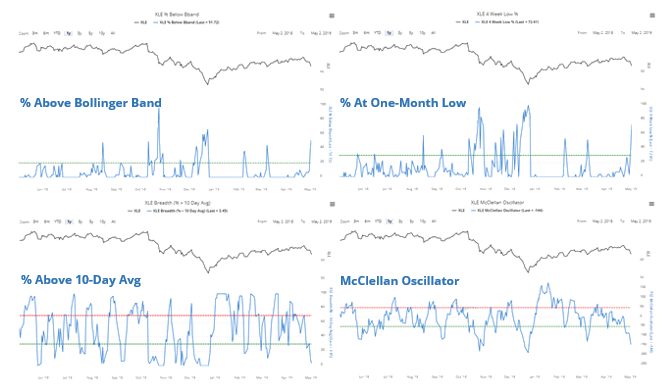 When the sector had rebounded more than 15% from its low, readings like this usually led to medium-term rebounds. These conditions led to major failures in 2002 and 2008, both right before the final meltdown at the ends of those bear markets. It would be a stretch to suggest that we’re in a similar market environment now.

Two of the commonly-cited “risk-on” indexes enjoyed stellar gains on Friday. The Nasdaq Composite hit a multi-year high on its best gain in 7 weeks. The Russell 2000 broke out to its highest level since early October.

While both performances have led to above-average returns for those indexes, their influence on the S&P 500 was not strong.

The 3-Year Min/Max Screen shows that “smart money” hedgers moved to another record position in VIX futures, but that has not been a consistent negative for stocks. Hedgers also moved to multi-year long exposure in corn and soybeans, and they’re getting close in the contracts that make up the DBA fund.

XLF took in more than $700 million on Thursday.

The post titled 4 Energetic Extremes was originally published as on SentimenTrader.com on 2019-05-06.