3 Reasons to be Concerned About Bitcoin's Prospects

Cryptocurrencies have had one of the most explosive weeks in years.

After a plunge, recovery, plunge, and another recovery, traders became pessimistic enough to push some sentiment gauges to their lowest level in a year or more, which is already leading to a short-term bounce.

More than any other factor, volatility drives sentiment, especially in this market. So if we focus on that, we can get a handle on similar conditions.

One of the better ways to do this is to use the same calculations to create a synthetic VIX for stocks, which we last discussed in July. The calculation is based on five different models using open-high-low-close data.

This isn't as clean for crypto because there isn't necessarily a good cutoff point to determine trading sessions. We rely on Bloomberg's data of the Bitcoin/USD cross rate to determine session times.

When we use these models to craft a synthetic VIX, it spits out a number that has been matched few times in bitcoin's history, at just over 200%. 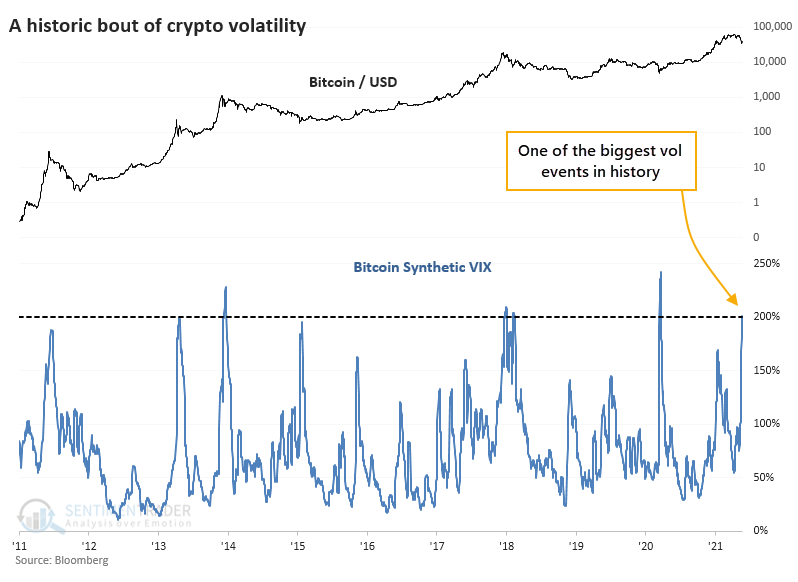 The only time that a volatility event like this marked a bottom was in March 2020, at the height of pandemic-related liquidations. That came after eight months of selling pressure, while this one did not - crypto markets were hitting record highs only a month ago.

There were three other times when bitcoin was recently at a peak, and then volatility spiked, twice in 2013, then again in 2017. All three preceded large and persistent losses for the coin.

The post titled 3 Reasons to be Concerned About Bitcoin's Prospects was originally published as on SentimenTrader.com on 2021-05-26.