2 Reasons Why Earnings Season Is A Worry

As companies start to report earnings this week, there is a fear that projected weak growth could be a stumbling block. To check, we go back to 1930 and look for every two-year span with the most similar earnings pattern of high growth, then low to negative growth, then higher growth again, which is what we’re projected to see over the next year. 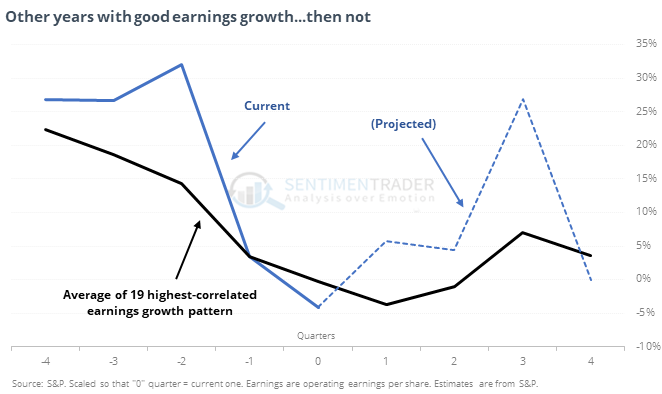 When the equivalent of the current quarter’s earnings started being reported, a little over a weak after the end of the quarter, there was usually some weakness in the S&P. That persisted over the next month or so.

Another common fear is that since stocks have already rallied, we’re less likely to see further gains once companies being reporting their Q1 earnings.

Stocks generally behave well during this reporting season, and the fact that the S&P was just at a 100-day high puts only a modest damper on the prospects.

The S&P stretched its winning streak to 8 days and scored a new 6-month high in the process.

This kind of price persistence when hitting multi-month highs was a modestly good sign over the medium-term.

The post titled 2 Reasons Why Earnings Season Is A Worry was originally published as on SentimenTrader.com on 2019-04-09.