Mom & pop sell while newsletters tell them to buy

Much has been made of the idea that despite much real-money evidence to the contrary, individual investors are not optimistic. Pretty much the sole source of this opinion is a weekly survey from the American Association of Individual Investors.

Even though stocks hit records again this week, the percentage of bulls remains low and bears remains high, so the Bull Ratio is still extremely low. That's not only unusual given stocks' returns in recent months, it's unusual compared to other surveys.

The poll of newsletter writers by Investor's Intelligence, for example, is showing extremely high optimism. That makes our current juncture the most unusual in the more than 30 years that both surveys have been released.

The spread between the 4-week average of the Bull Ratios from both surveys just hit a record low. Never before have we seen such pessimism from individuals at the same time as there has been such optimism from newsletters. 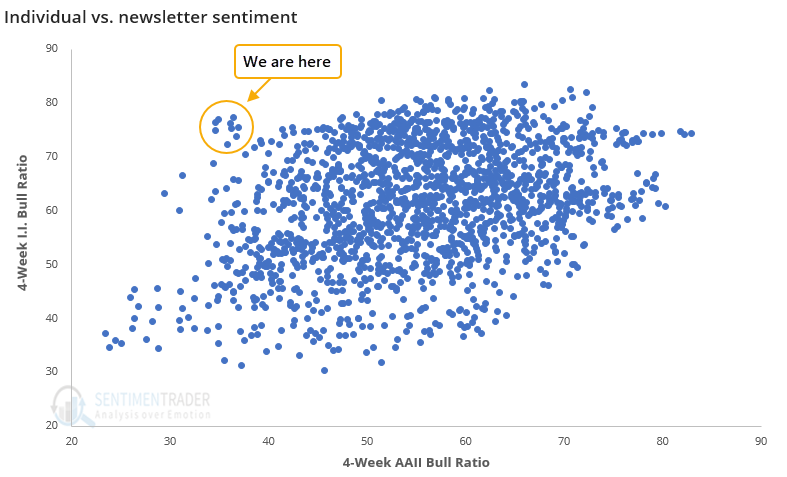 The S&P 500's annualized return when the spread is positive (AAII > Investor's Intelligence) is more than twice as high as when the spread is negative. In other words, when individuals were more optimistic than newsletter writers, then stocks performed better. So much for the idea that mom & pop are always the dumb money.

The post titled Mom & pop sell while newsletters tell them to buy was originally published as on SentimenTrader.com on 2020-08-24.