Stocks Shrug Off Economic Reports Amid Buying Follow Through

Economic reports haven’t kept up with economists’ outlooks, but it hasn’t mattered as the S&P 500 has rallied to all-time highs. When stocks hit a 200-day high and economic surprises a 200-day low, future returns were good. They were even better when economic surprises were positive, though.

Once more, with feeling

After ending a long stretch without a 52-week high, the S&P followed-through on Monday with a large gain. 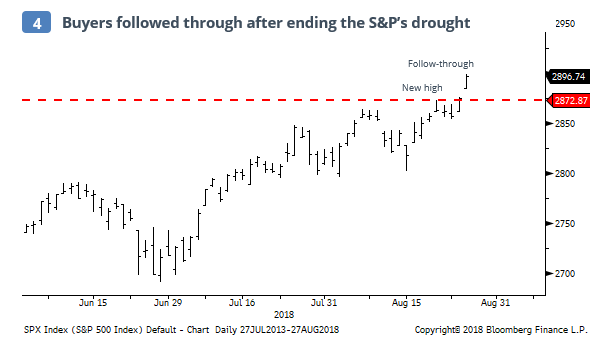 The Optimism Index on gold has moved above 30 after dropping below 20 in the past week. There have been five similar signals since 1991, leading to a positive return over the next three months four times, with one minor loss.

The post titled Stocks Shrug Off Economic Reports Amid Buying Follow Through was originally published as on SentimenTrader.com on 2018-08-28.