A Cluster Of Warnings

If we focus on one particular data point too much, then we risk getting blindsided by a structural market change or simply a failed signal. That’s why we tend to look at a lot of different things, from a lot of different perspectives, to see what the overall theme is.

So, this will probably be one of the last times we focus on some of the breadth warnings that are popping up. The only reason to bring it up again is that it has branched out from only triggering on the Nasdaq to also now being on the NYSE.

Both exchanges are throwing off Hindenburg Omens and Titanic Syndromes on a daily basis. This is now one of the biggest clusters of warnings since 1986.

Despite a steady monthly climb in stocks, investors continue to de-leverage. Margin debt has held steady or declined for most of the past year.

Going back over 80 years, similar setups led to mixed returns.

Over the past few months, various indices' monthly MACD histograms have turned positive. I've demonstrated that this typically marks the beginning of a big rally in stocks over the next 1-2 years. Barring a significant decline over the next week, the NASDAQ Composite's monthly MACD histogram will also turn positive for the first time in 12 months as of November's close. 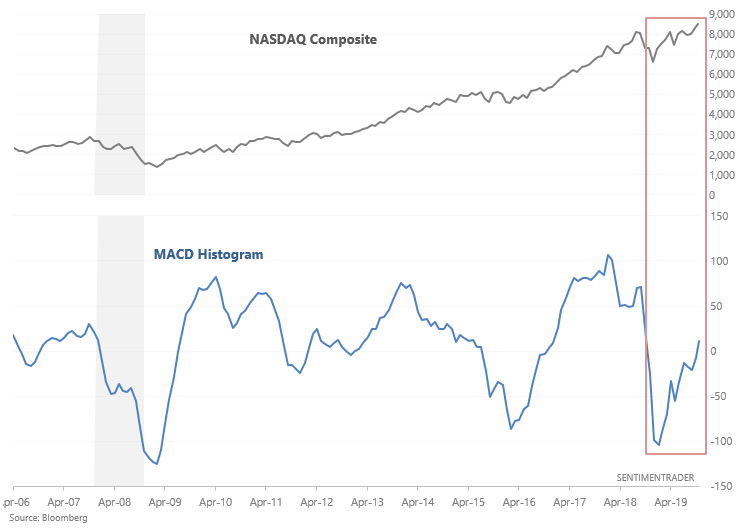 When the MACD histogram turned positive for the first time in more than 6 months, the NASDAQ Composite typically surged over the next 6-12 months. 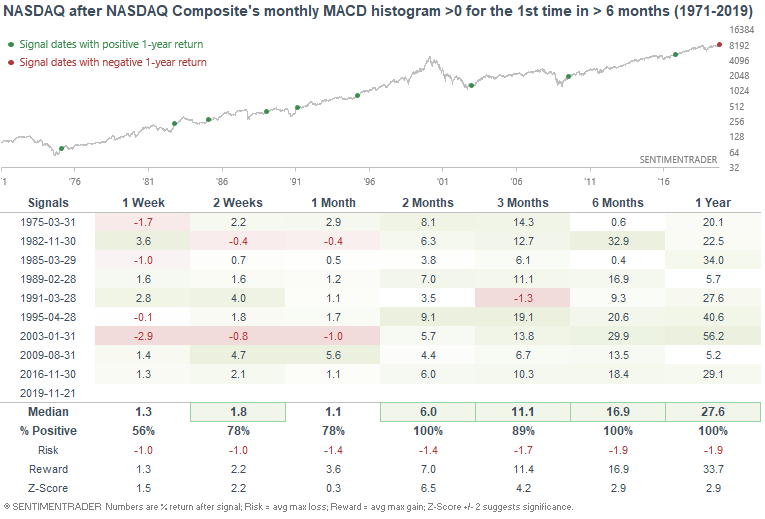 There are quite a few shorter-term warning signs that have popped up lately, but when we look at longer-term momentum, it has reached a level that most often precedes further long-term gains.

The post titled A Cluster Of Warnings was originally published as on SentimenTrader.com on 2019-11-22.